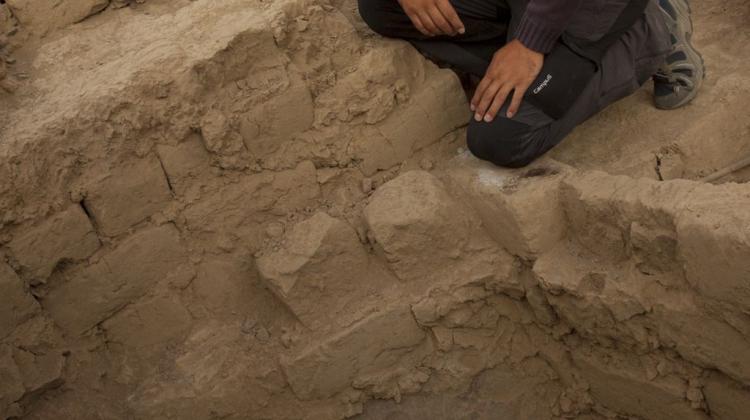 Tomb containing skeletons of 63 people and more than 1,200 precious objects made of silver, gold, bronze, semi-precious stones, alabaster and other materials has been found in Peru by Polish archaeologists.

The team, led by Dr. Miłosz Giersz of the Institute of Archaeology and the Centre for Precolumbian Studies of the University of Warsaw made these discoveries in Huarmey, 300 km north of the capital Lima.

The tomb is one of the representatives of the Wari culture and dates back to the eighth century AD. The finds include richly ornamented jewellery, luxury goods imported from remote parts of the empire, including obsidian and decorated ceramics, and unique, decorated ceremonial kero mug made of white stone.

"The discovery is important from a scientific point of view, because so far all the known remains of tombs of the rich elite of this culture have long been looted or destroyed. Polish archaeologists were the first to have the opportunity to examine an intact and complete tomb, belonging to the high aristocracy of Wari" - explained PAP Prof. Mariusz Ziółkowski, the head of the Centre for Precolumbian Studies of the University of Warsaw, currently in Peru.

Research project in Huarmey is one of nine research projects carried out in the Andes by the Centre for Precolumbian Studies, headed by Prof. Ziółkowski. Researchers are also working in Cusco, Machu Picchu and Easter Island.

According to Dr. Miłosz Giersz, the discovered tomb could belong to the wife of one of the rulers of the empire, which later laid the foundations of the Inca Empire. Found artefacts are now being restored and preserved by an international team of experts at the MALI Art Museum in Lima. Some of them will become the main attraction at the exhibition planned for the first half of 2014.

Other members of the team of explorers were Dr. Patrycja Prządka-Giersz (Faculty of Artes Liberales, University of Warsaw) and Dr. Wiesław Więckowski (Institute of Archaeology, University of Warsaw). The discover was made in cooperation with the Peruvian archaeologists from the Pontifical Catholic University in Lima - Dr. Krzysztof Makowski and Lic. Robert Pimentel Nita.