Lipińska–Nałęcz on the success of Hyperion: win by several lengths 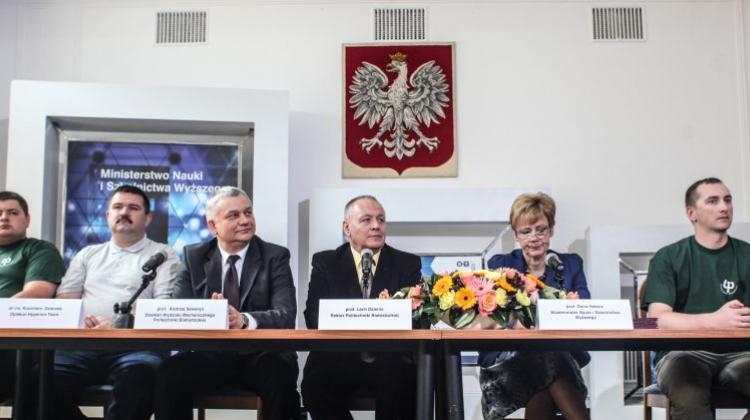 It was a win by several lengths, said Deputy Minister of Science prof. Daria Lipińska–Nałęcz about the success of students from Białystok at the University Rover Challenge in the U.S. Meeting with the constructors of Mars rovers Hyperion was held at the Ministry of Science and Higher Education.

This is the second win of Białystok students in the history of the competition. In 2011, their jeep Magma2 took the highest place on the podium. "We were wondering what to do to raise the stakes. It turned out that this time we broke the historical record, scoring 493 out of 500 possible points. Second team was also a team from Poland, this is also a record" - said at the conference coordinator of the Hyperion project Piotr Ciura. "In America, not everyone knows where Poland is. It’s time they find out" - he added.

According to the Hyperion team members, the greatest advantage the Polish team had over the other teams, even in those from the U.S., were teamwork and good general preparation. "Every one of us knows how the robot is built. If anything goes wrong, each of us can diagnose the problem. This translates into fast response and quality of work, we can take over for each other" - explained developer Robert Bałdyga in an interview with PAP.

When the Hyperion’s mast broke, the repair went smoothly due to the good cooperation - added electronics expert Jacek Wojdyła. "Competition judge said that in such U.S. team members would begins to shout at each other and point out each other’s mistakes, and we acted calmly and in three minutes the mast was fixed" - he recalled.

"In the field of engineering and information technology we have a leading position in the world" - emphasised Deputy Minister of Science and reminded that the two teams had won the Minister of Science and Higher Education competition "Generation of the Future". Ministry of Science supported their participation in the competition. The support program, launched in 2013, finances teams of young people who prepare projects for international competition. As part of the grant, student teams can receive up to PLN 500 thousand. "This amount helps take the first steps. If we add the financial and organisational support of the university, we are on the way to success" - said Deputy Minister.

Bialystok University of Technology students cannot complain about the lack of support from the university. "Our faculty is well organized. We have co-financed the team and diminished bureaucracy. If the students - as today\'s regulations require - prepared public procurement only with the help of the university administration, they would not complete the project on time. They knew what they wanted to buy, and had vice-dean’s support, so they did not waste time on bureaucracy" - explained in an interview with PAP Dean of the Faculty of Mechanical Engineering Prof. Andrzej Seweryn.

According to Prof. Seweryn, the success of student teams is also a result of the university’s support system for research projects, which included funding for new projects and promoting the best of them. "But we must also remember that standard training, lectures and workshops, is not enough. We must also be creative. Students must carry out their tasks, work in groups" - he stressed. Currently, several student teams work on various interesting projects at Bialystok University of Technology.

Students do not exclude competing in the University Rover Challenge next year - with a new and improved version of the robot. The rover built for this year\'s event will remain at Bialystok University of Technology promote it and help in teaching. Previous versions of the machine were exhibited, among others, during science days in Białystok. "The vehicle, after slight adjustments, can be a vary good robot for antiterrorists. It can move on any surface, and its control is resistant to interference" - said Seweryn.

Bialystok Technical University students came to the conference in Warsaw directly from the airport. Polish rover will return in at least a week.

"I am proud that we were able to finance the construction of the rover and its start in the competition. Hyperion team showed the world that Polish students can conquer not only the world, but the universe" - wrote Prof. Barbara Kudrycka in a release sent to PAP.

"We have created a system of support for the most talented students, and it is already bearing fruit. +Generation of the Future+ allows students to compare their achievements with their peers from around the world, see technological innovations and pursue their passion" - emphasised the minister.

Winning Hyperion is a vehicle with six independently powered and controlled wheel, articulated manipulator, GPS and vision system. It is capable of moving in the desert, sandy and rocky terrain, and climbing elevations inclined even at an angle of 50 degrees.

Scorpio III was built at Wrocław University of Technology. Each of the six wheels is driven by a separate motor. The structure is based on an aluminium frame. The rover is doing very well in the field thanks to its joint design that enables it to turn better and climb high obstacles. Another improvement are very lightweight grid design wheels. One pair of wheels, however, is made of soft and durable material (Cordura), filled with powdery granules. This prevents transferring vibrations to rest of the structure even while riding on a very uneven surface.