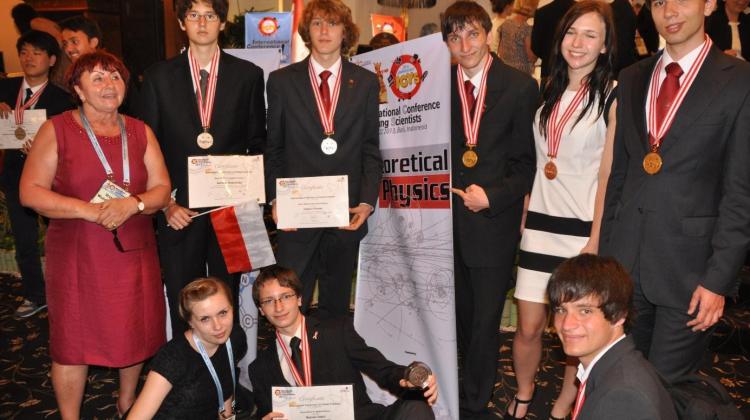 Examining ball movement in the air stream, describing the semiconductor rotation in the magnetic field and work on collisions of drops of liquid are activities of Polish students awarded gold medals at the International Conference of Young Scientists ICYS 2013 in Bali.

Polish participants of ICYS 2013 are winners of the National Conference of Young Scientists organized by the Laboratory of Physics of the Palace of Youth in Katowice. They are also members of the Creative Group Quark, which represents Poland every year in many competitions in the country and abroad.

Polish participants won two gold medals in Theoretical Physics. The work of Tomasz Tokarski (High School no. 1 in Bytom) concerned the ball in the air stream. He observed that a ball floating in the air stream is not steady, but vibrates, and these vibrations are not chaotic and Lissajous curve can be the trajectory of the ball.

Mariusz Nowak (High School no. 8 in Katowice) presented the photo-magneto-electric effect, I which he investigated the phenomenon of the rotation of illuminated semiconductor in the magnetic field due to the interaction of the magnetic moment of the current flowing inside the sample with the external magnetic field. In his work, he used and documented his broad interests.

The third gold medal went to Michał Grzegorzek (High School no. 1 in Wodzisław Ślaski) in the Applied Physics category. The high school student observed the moments of impact of liquid drops with a liquid surface and made photographs of the observations.

This year’s ICYS was attended young science enthusiasts from around the world.