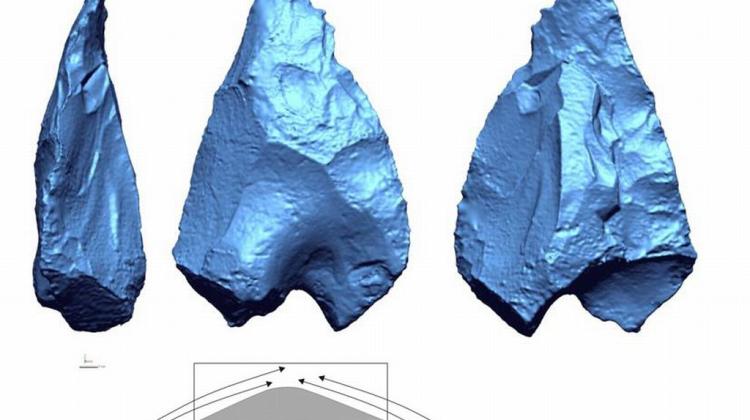 More than a thousand flint tools and waste generated on during their treatment were discovered near Pietrowice Wielkie (Silesia) by archaeologists from the Institute of Archaeology, University of Wrocław - told PAP head researcher Dr. Andrzej Wiśniewski.

The flint workshops, remains of which were found by archaeologists, had been used by Neanderthals. The researchers are waiting for more detailed information on the site dating. The workshop is certainly more than 45 thousand years old.

"Tools were made by a specific canon of Neanderthals living in Central Europe. These items have a cutting edge on both sides, they are bifacial" - said Dr. Wiśniewski.

Tools, including bifaces and asymmetric blades, are made of siliceous rocks, commonly called flint. According to head researcher, Neanderthals made their tools with holders made of antlers, wood or other materials. This is evidenced by the results of the microscopic analysis of similar items discovered in Germany. Among the flint, archaeologists also found fragments of coarse grained crystalline rock used as pestles - support tools in the manufacture of other tools. This is one of few places in Poland, where archaeologists discovered tools of this kind.

"We believe that a thorough analysis of the remains of biface and knife workshop will allow us to better understand the procedures for making these complex tools. We are also going to compare our finds with the ones from Moravia, because we would like to answer the question asked for a long time: how were the Neanderthals living the present territory of Silesia connected with the group from Moravia? Was it the same population or a completely separate community?" - added the scientist.

According to archaeologists, the place the discovery is not accidental. Further south is the Moravian Gate, known migration route of nations from southern European over the millennia. This is one of the Central Europe’s largest corridors intersecting Sudetes and Carpathian Mountains.

"In this territory, we are finding traces of various activities: from hunting and slaughtering migrating wild game, to places of prolonged stay of Neanderthal groups of hunters and gatherers" - said the archaeologist. However, this is the first site so rich in finds from the Paleolithic period found in this area.

Archaeological work on the site began in August 2012 and will continue this summer. One of the first tasks will be to take samples needed for more accurate dating of the site. The analyses will be carried out by thermoluminescence (TL). It is used to determine the age of deposition of particular layers. Also involved in the work in the area of the site is Dr. Janusz Badura, responsible for natural research.

"We also need to learn more about the natural and climatic conditions accompanying the Neanderthals. This is the purpose of the search for sediments containing pollen from the period of interest. Our dream is to discovery skeletal remains of the game of the period" - concluded the researcher.