Polish archaeologists have discovered the oldest houses in Africa 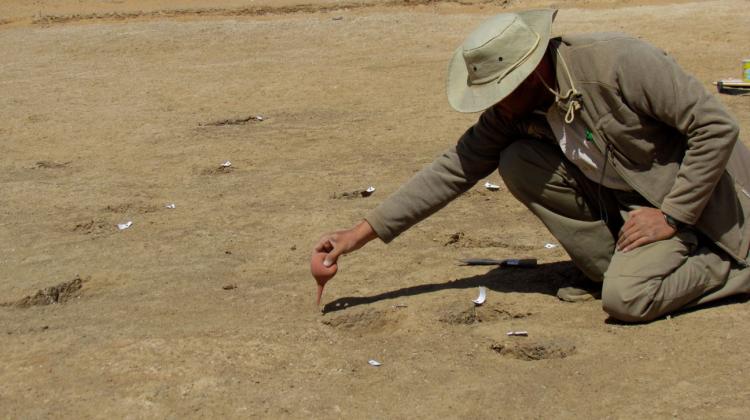 During ongoing excavations in northern Sudan, Polish archaeologists have found the remains of human settlements, whose age is estimated at about 70 thousand years, the Institute of Archaeology and Ethnology in Poznań informed PAP.

This finding, according to the researchers, refutes the previous assumption that the construction of permanent houses was associated with the so-called great exodus from Africa and settling in the colder parts of Europe and Asia.

Affad 23 site explored by Polish archaeologists, is the only so far in the Nile Valley showing that early Homo sapiens was not only a weak part of a great ecosystem, living from day to day. He built sizable houses, planned distribution of a camp party with different functions, adapted well to the wetland environment. This points to a much more advanced level of human development in Africa in the Middle Paleolithic than scientists previously assumed. This is the time when Neanderthals still lived in Europe.

"Discoveries in Affad are absolutely unique for the Middle Palaeolithic. Last season, we came across a few traces of light wood structures. However, only during the current studies we were able to precisely locate the village and identify additional utility areas: a large flint workshop, and a space for cutting hunted animal carcasses, located at a distance" - explained Dr. Marta Osypińska from the Institute of Archaeology and Ethnology PAS in Poznań, head of the project.

Also of interest to researchers is a growing list of animal species that early humans hunted. Despite the relatively simple flint tools, obtained only with the so-called Levallois technique, humans hunted both large, dangerous mammals such as hippos, elephants and buffalo, as well as small, nimble monkeys and cane rats - large African rodents inhabiting wetlands.

Data obtained during the study of Polish archaeologists not only greatly enrich the knowledge about life in the time of the conquest of the Old World by the modern man. They also allow to determine the degree of intellectual development, indicating specific, rational behaviour, and the ability of planning.

"At this stage we know that the Middle Palaeolithic settlement episode in Affad occurred at the end of the wet period, as indicated by environmental data, including the list of hunted animal species. But in the distant past of the land such ecological conditions occurred at least twice” about 75 millennia and about 25 millennia ago. Determining the time when people inhabited the river bank near today\'s Affad in the most important objective of our project "- said prehistory expert Piotr Osypiński.

Polish scientists cooperate with scientists from Oxford, who perform analysis of the geological history of the area. The results will help determine climatic and environmental conditions that prevailed in the Central Valley of the Nile in the late Pleistocene and identify the factors that contributed to such a good state of preservation of Affad 23 site. This is the purpose of a series of deep survey excavations at strategic locations of the Affad Basin. "By tracking the system of layers we will reconstruct the history of their formation and determine at which point people came here, and how they selected places to settle" - explained Dr. Osypińska.

This year\'s work will continue almost until mid-March, but the results of specialized tests will be known only in the second quarter of the year. The project is funded by the National Science Centre. More information is available on the official website: www.archeosudan.org