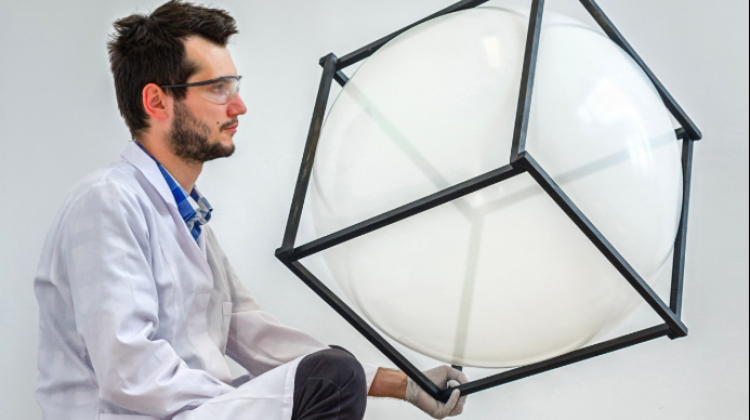 Chemists from the Institute of Physical Chemistry of the Polish Academy of Sciences in Warsaw and the Warsaw University of Technology have incorporated an exceptionally large ion, guanidinium, in the structure of perovskites. (Source: IPC PAS, Grzegorz Krzyzewski)

There is no doubt: the immediate future of photovoltaics will be decided by materials from the perovskite group. An improved version of a perovskite, containing in the crystal structure a relatively large organic ion, a guanidinium cation, has been developed by chemists from the Institute of Physical Chemistry of the Polish Academy of Sciences and the Faculty of Chemistry of Warsaw University of Technology. Laboratory tests at the École Polytechnique Fédérale de Lausanne have shown that photovoltaic cells made of the new perovskite work more efficiently than the cells prepared using its original form.

A relatively large guanidinium cation was incorporated into the crystal structure of the classic perovskite using a ‘solvent-less’ mechanochemical approach. This success, described in the Journal of the American Chemical Society, was made possible by the efforts of a group of scientists from the Institute of Physical Chemistry of the Polish Academy of Sciences (IPC PAS) in Warsaw and the Faculty of Chemistry of the Warsaw University of Technology (WUT), headed by Prof. Janusz Lewinski. Photovoltaic tests of the solar cells consisting of the new mechanoperovskites were carried out in the Prof. Michael Grätzel’s research group at the École Polytechnique Fédérale de Lausanne (EPFL, Switzerland). The experiments proved that from many aspects the new, modified perovskites are clearly better than the parent (CH3NH3)PbI3.

Perovskites are a large group of materials with a cubic crystal structure, described with the general formula ABX3. The cation, designated by the letter A, is at the centre of the cube, in the centre of each wall there is an anion X, and in the corners there are metal coordination centres designated as the letter B. The first known perovskite was calcium titanate (CaTiO3), a mineral discovered in Siberia in 1838, named in honour of the Russian geologist Lev Perovski. It quickly turned out that in the structure of the perovskite, the ions of oxide, calcium and titanium can be replaced by other ions, which makes it possible to tune the physicochemical properties of perovskites in a controlled manner.

"One of the main areas of perovskite applications today is photovoltaics. The organic-inorganic halide perovskites used here generally contain organic methylammonium cations (component A) located in the centres of the crystal lattice cubes. These cations easily undergo gradual degradation under the influence of external factors, e.g. water, but also as a result of photochemical reactions or the action of an elevated temperature. We attempted to mechanochemically replace some of the methylammonium cations by guanidinium ions. The choice of the latter was not accidental", says Marcin Saski, PhD student at the IPC PAS, one of the co-authors of the publication describing the achievement.

In the perovskite structure, the methylammonium ion CH3NH3 + is often replaced with a slightly larger formamidinium ion CH(NH2)2 + , which is more thermally stable. In addition, it has a delocalized bond between the carbon atom and two nitrogen atoms, improving the semiconductor properties. Scientists from the IPC PAS ambitiously attempted to incorporate an even larger guanidinium ion, C(NH2)3 + . Its both an internal high symmetry and an extended conjugated unsaturated bond system stabilize the perovskite material and make it possible to increase the charge carrier lifetime. A mechanochemical method was used to introduce guanidinium into the perovskite crystal lattice by grinding the precursors in the proper stoichimetry.

"In contrast to standard chemical reactions taking place in solutions, the mechanochemical reaction takes place entirely in the solid phase, and the chemical transformations are induced by mechanical force. The mechanochemical reactions offer a significant advance by avoid the use of harmful solvents and high temperatures. This is truly green chemistry, and due to the fact that the laboratory equipment required is not demanding, it is also easy on the wallet", clarifies Dr. Daniel Prochowicz, beneficiary of the individual Marie Sklodowska-Curie grant of the European Union framework programme Horizon 2020, carried out in the team of Prof. Grätzel.

During numerous tests conducted in Prof. Lewinski`s group, it was found that the crystal structure of the perovskite remains stable when even 25% of the methylammonium ions are replaced by guanidinium cations. Advanced diffraction studies and nuclear magnetic resonance (NMR) spectroscopy leave no doubt: guanidinium homogeneously incorporate into the perovskite crystal structure.

"The improvement of the photovoltaic parameters in perovskites containing guanidinium ions is perhaps not particularly spectacular, but it is very clear. What`s more, increases can be seen in not one, but several important parameters", emphasizes Prof. Lewinski and adds: "It is worth noting that our perovskites with guanidinium contain less volatile amine and are more resistant to external factors than the parent perovskite. The higher durability of the photovoltaic cells is a considerable argument in favour of their commercialization".

The research was financed as part of the GOTSolar research project and the Marie SkłodowskaCurie fellowship, which are part of the European Union Horizon 2020 programme.