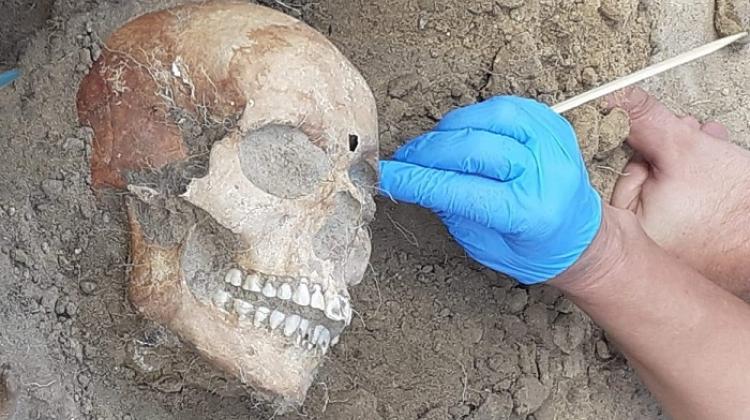 Archaeologists have found the skeletal remains of a 17th century woman buried with a sickle around her neck and a padlocked toe to stop her ‘rising from the dead’.

Discovered in the village of Pień near Dąbrowa by scientists from the Nicolaus Copernicus University in Toruń, the grisly find has been described as the first of its kind in Poland.

Researcher Magdalena Zagrodzka said: “The uniqueness of this discovery results from the surprising combination of three elements: sickle and padlock, both having symbolic meaning derived from folk beliefs, and the presence of possible headwear made of silk embroidered with silver or gold thread. This last element is evidence of the high social status of the buried woman.”

She added that a sickle placed with its blade around the neck and a triangular padlock on the large toe of the left foot, symbolizing the end of a certain stage of life, could protect against the return of the deceased, which those who buried her probably feared. In this context, these practices can be considered anti-vampiric.

According to Zagrodzka, the woman's body was arranged very carefully, with her head on the pillow. Near the skull there were the remains of what could be a cap tired under the chin. Well -preserved teeth could indicate that it was a young person.

During the anthropological analysis, Dr. Alicja Drozd-Lipińska will check whether the remains of the deceased show traces of illness. Attempts to solve other mysteries related to the discovered burial will be made by researchers from the Institute of Archaeology of the Nicolaus Copernicus University, where the research material has been transported. They will check, for example, whether anything had been placed into the mouth of the deceased. Other detailed analyses (including DNA) and possibly the reconstruction of the deceased person's face will be carried out.

This is not the first significant discovery related to the research site. During work carried out in 2005-2009, researchers discovered the remains of two cemeteries: early medieval one with richly equipped chamber graves (10th/11th century) and a 17th-century Protestant necropolis.

Zagrodzka said: “Our discoveries included an unusual grave of a man on whose lower leg there was a child in a cross-like arrangement. We also found a child's burial with a similar, triangular padlock, just like the one found this year.”

Further research work is now planned in the cemetery. Zagrodzka said: “The head of the Dąbrowa Chełmińska commune promised his support, as the commune plans to exclude the site area from agricultural operation.

“There is also talk of using this area in the context of promoting the knowledge about early medieval and modern funeral practices.”

The discovery was made on August 30 by a research team under the scientific supervision of a Nicolaus Copernicus University professor, Dr. Dariusz Poliński. The expedition members included anthropologist Dr. Alicja Drozd-Lipińska and Dr. Łukasz Czyżewski, who was responsible for measurements, documentation and photogrammetry.

The project combined scientific research with rescue (protection of the discovered cemetery) and science promotion activities. Its participants were employees of the Institute of Archaeology of the Nicolaus Copernicus University, volunteers and village residents.