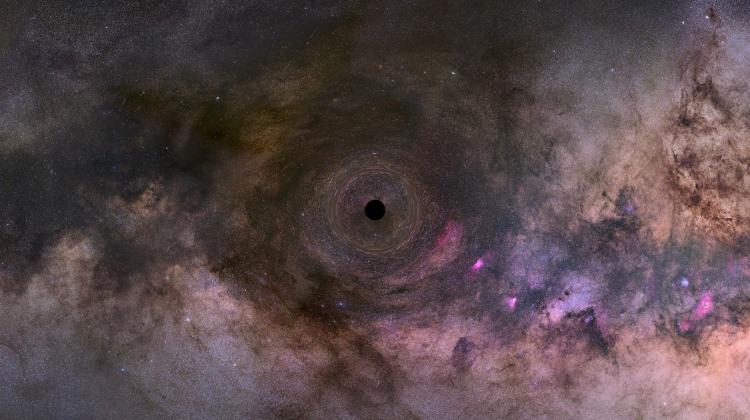 Artistic vision: The background of the Milky Way distorted by the gravity of the free-floating black hole. As a result of its huge gravity, the black hole bends the space around it, causing distortion of images of the background stars behind it. Source: NASA, STScI, credit: FECYT, IAC.

Two international teams of scientists, including astronomers from the Astronomical Observatory of the University of Warsaw, announced the discovery of a lonely black hole in the Milky Way. This is the first detection of this type.

The existence of a free-floating black hole in the Milky Way was revealed as a result of many years of observations conducted as part of the OGLE project implemented by the University of Warsaw. The project uses gravitational microlensing, which is the result of general relativity, to search for invisible objects. The microlensing phenomenon occurs when the light from a distant source is bent by a closer object called a lens.

On June 2, 2011, the OGLE project scientists observed the gravitational microlensing event OGLE-201-BLG-0462. The object was independently detected by the New Zealand-Japanese MOA project.

Professor Andrzej Udalski from the Astronomical Observatory of the University of Warsaw, said: “When we detected the brightening, which was undoubtedly caused by gravitational microlensing, we did not anticipate that this would be a breakthrough discovery. Now, the event became the jewel in the crown of over 20 thousand microlensing events discovered by us.”

The modelling results indicate that the invisible object causing gravitational microlensing has a mass of 7 or 4.2 solar masses. These are results from both research teams, the difference is due to a slightly different way of analysing data, but the masses indicate that the object is most likely a black hole.

Black holes are objects whose gravity is so strong that nothing, even light, can escape. The first theoretical considerations about such objects appeared in the 18th century, but the proper development of research on them occurred in the 20th century. For many years, black holes remained purely theoretical objects, but the development of observation techniques made it possible for astronomers to obtain observational evidence of their existence.

The first object in which the black hole was detected was the binary system Cygnus X-1. We now know several dozen other binary systems with black holes with a mass of several solar masses. In recent years, thanks to the detection of gravitational waves, the existence of more black holes has been confirmed.

These black holes, however, are objects in binary systems with a star or ones surrounded by matter falling on them or circulating stars and clouds, which allows to detect the existence of an invisible object. The theory of star evolution predicts that black holes should form at the end of evolution of massive stars. There should be a lot of such free-floating objects. But how to detect them if classic methods are useless?

Astronomers from the OGLE project have an answer and they have just shown it is an effective one by discovering the first free-floating black hole. The objects that do not emit light can be detected with the help of gravitational microlensing. When a massive object is found in the path of light rays, it distorts them. Gravity works like a giant lens and strengthens the light of a distant star. When observing from Earth, we will see a brightening of a distant star, changing in a characteristic way. Microlensing depends on the mass of the lens, not the brightness, so it is a great way to detect invisible objects, for example lonely black holes.

The more massive the lens, the longer the gravitational microlensing persists. In the case of a lens with a mass of several solar masses (the range of masses of black holes), the phenomenon can last up to several years.

For massive lenses it is possible to observe an additional effect called astrometric microlensing. It is extremely difficult to detect, and it consists in the fact that gravitational lensing can also alter the position of the source star in the sky. Simultaneous photometric and astrometric observations of microlensing make it possible to determine the mass of the lens, and the type of the object.

The microlensing event OGLE-2011-BLG-0462 was regularly observed by the OGLE team for nine years, collecting over 15,545 photometric measurements, which became the basis of the photometric model of this event.

When it was clear that the event timescale was relatively long (and so the lensing object could be massive), in the second half of 2011 a team of astronomers led by Professor Kailash Sahu from the Space Telescope Science Institute in the US initiated observations of the event with the Hubble Space Telescope (HST), performing astrometric measurements. These observations were supplemented in 2021 with additional measurements by another team led by a PhD candidate Casey Lam and Professor Jessica Lu (University of California, Berkeley).

Dr. Przemysław Mróz, a member of the OGLE project who carried out the modelling, said: “The results of the modelling clearly indicate that the event OGLE-2011-BLG-0462 was caused by an object several times more massive than the Sun. A light of an ordinary star of that mass would have been easily detected, so the lensing object must be a free-floating stellar-mass black hole.”

The discovery of the first free-floating black hole in the Milky Way confirms that there should be a lot more. It also opens a new path for detecting black holes. Scientists hope to find more cases of lonely black holes, for example thanks to the ESA's Gaia space observatory, which will allow scientists to estimate the population of these objects in our galaxy and determine the distribution of their masses.