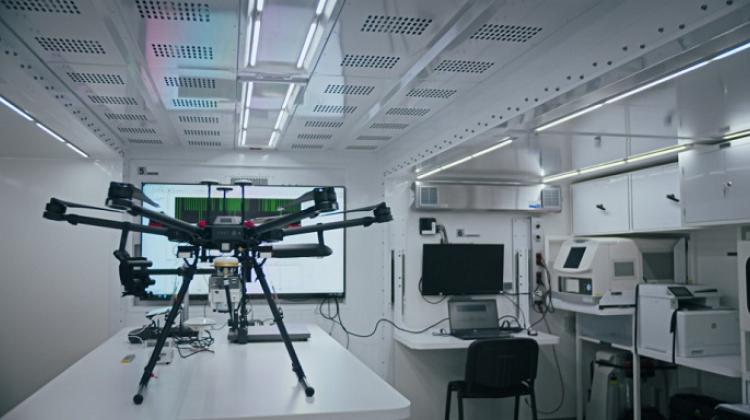 Fast DNA profile, finding fingerprints, event reconstruction based on ballistic traces, as well as the analysis of CCTV recordings and obtaining data from mobile phones are possible with the mobile forensic platform developed by a consortium led by the Warsaw University of Technology.

The platform has the form of a 6-meter fold-out container equipped with devices that allow forensic experts and technicians to carry out on-site forensic examination. It has an autonomous power supply system and can operate in various field and atmospheric conditions. It is adapted to moving on various surfaces including hills, uneven terrain, stairs, etc.

One person can prepare the platform for work in 15 minutes; with a staff of several people preparation is much faster.

The main tasks of the Mobile Forensic Platform include identifying and securing traces on sites of terrorist attacks and disasters, conducting basic analyses of the collected materials and supporting inspection groups documenting the scene. The platform is equipped with a drone with LIDAR system, laser-radar devices, 4K cameras. It contains equipment that enables biological analyses (including DNA), fingerprint analyses, mobile phones and monitoring data analyses and analyses of ballistic traces.

The platform has six workstations for forensic specialists. Its internal computer network complies with the standards used in the Police, allowing each operator to access police systems and databases (in accordance with granted rights).

According to Warsaw University of Technology: “The main task of the Mobile Forensic Platform is to provide on-site support to groups of investigators who investigate an extensive and forensically complex scene. The mobile container laboratory, regardless of its configuration, cannot completely replace a stationary forensics lab, but it allows to quickly verify the selected evidence.”

The solution was developed by a consortium of: the Faculty of Automotive and Construction Machinery Engineering of the Warsaw University of Technology, Wojskowe Zakłady Łączności Nr 1 SA and Hagmed sp.z o.o. for the National Centre for Research and Development.

The platform’s creators said: “In recent years, there have been more and more extraordinary events related to natural disasters, accidents and terrorist attacks. This generates the need to prepare and properly equip the uniformed services with integrated tools for forensic examination of scenes of events, in particular the identification of perpetrators and victims.”

They added that such situations caused the idea to develop a mobile platform for quick identification on the site of a mass incident - a terrorist attack or disaster.

The device was presented at the International Police & Security Expo POLSECURE in Kielce, where it won the main prize. Find out more - HERE.