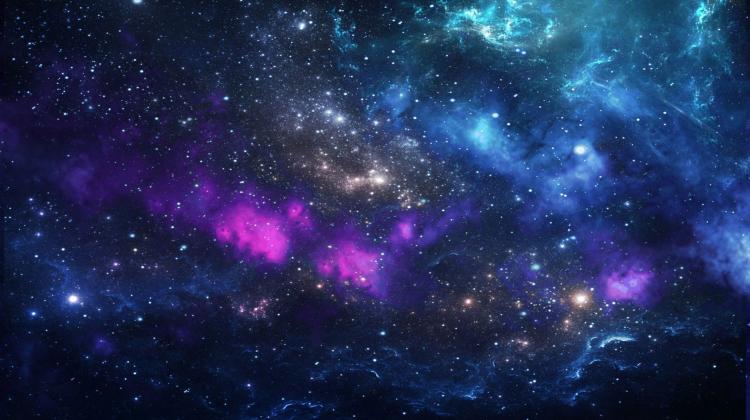 Gamma-ray bursts are among the most energetic processes in the Universe. For years they have been the focus of astrophysics. Scientists expect that lensing of gravitational signals from such events is possible. Researchers from the National Centre for Nuclear Research take part in the search for confirmation of these expectations.

"Gamma-ray bursts (GRBs) are observed across the sky and they are so bright that their signals reach us from the farthest corners of the Universe. We owe good understanding of the cosmological origin of GRBs and their nature to a Polish researcher, Professor Bohdan Paczyński. The farthest observed GRBs have a redshift ~10. This means that their sources are objects from which the light travelled to us over 13 billion years', we read in the National Centre for Nuclear Research press release. 'Due to the large distance, we expect that the light reaching us from many of these objects can be subject to gravitational lensing caused by galaxies closer to us. However, apart from one recent case published in Nature, we have not yet observed a lensed GRB only on the basis of gamma data'.

According to the National Centre for Nuclear Research, it has been suggested for a long time that gravitational lensing can duplicate GRB signals. Observations of such phenomena could be used, for example, to significantly improve the accuracy of cosmological parameters, such as Hubble constant, to study the fundamental physics (by testing the speed of their propagation depending on energy), and to obtain a restriction on the abundance of dark matter in the form of compact objects (black holes, cooled neutron or white dwarf stars).

The research so far has focused on the observations of high-energy gamma radiation. International team of scientists including Professor Marek Biesiada from the Astrophysics Division of the National Centre for Nuclear Research proposes to extend the search for GRBs with multi-range observations of GRB afterglow.

'Searching for lensed GRBs poses several challenges', says Professor Marek Biesiada, quoted in the release. 'Firstly, gamma radiation is emitted into the area of a fairly narrow cone, which means that we need more luck for the arrangement of the source and the lens to result in observable multiple images. Secondly, gamma detectors' resolution is too weak to identify the location of these multiple images. Fortunately, the signals from images reach us with delay, so the detector should register two signals with identical shape. This poses another problem: the delay must be greater than 1 second, but shorter than 300 seconds. Otherwise, we have no chance to discover lensing in a gamma ray detector'.

The scientist adds that the time limit means that the lenses can be objects with masses between 100 and 10 million solar masses. 'It would probably have to be exotic objects, such as massive black holes with so-called indirect masses that are still only hypothetical. Fortunately, GRBs are accompanied by much longer lasting afterglows: first in X rays, then in visible light and radio waves. In addition, the glow radiation is no longer collimated into the interior of the cone. That means better chances of discovering a gravitationally lensed system. This is the idea that inspired me and Dr Aleksandra Piórkowska-Kurpas from the University of Silesia', says Professor Marek Biesiada.

Using the standard GRB glow model, the researchers described what observation data of a lensed GRB afterglow would look like. The analyses were based on two gravitational lens models: the point model (describing stars or black holes) and the galaxy model (called singular isothermal sphere). 'In this situation, X-ray glow would consist of a few bursts of a similar shape. In turn, the optical lightcurve of the glow could have brightenings on its falling branch when its glow inevitably decreases. Numerical simulations allowed to obtain predicted profiles of glow lightcurve depending on the mass of the lens and time signal delay', we read in the release.

Based on their analyses, researchers suggest that future search for lensed GRBs should focus on two cases of lensing objects.

The first would be a dense object, like a black hole with a mass of no more than 10 million solar masses. 'Delay would be small (~100 seconds or less), and multiplied gamma images can be separated or overlapping. However, if the delayed signal is weaker than the sensitivity of the detector, the equipment will only register one signal. In this case, subsequent observations of the afterglow in X-rays and optical ranges can be used to assess whether the image is lensed, or perhaps the object had several successive emissions. If the GRB signal is indeed lensed, then the X-ray afterglow would most likely contain several X-ray bursts with a similar shape. In the optical image of the afterglow, we should also observe lightcurve +peaks+', the researchers explain.

The second object would be a galaxy with a mass of 1-100 billion solar masses. 'In this case, a typical delay will be ~17 min - 28 h. Therefore, it will be extremely difficult (if possible at all) to detect gamma lensing. On the other hand, in X-rays, visible light and radio waves there should be clear flares (brightening) against the background of weakening afterglow emission. This phenomenon would allow to easily verify whether lensing has occurred', the scientists describe.

According to the researchers, considering that optical and radio telescopes are usually able to distinguish between individual multiplied images, it will allow to verify lensing. 'This is another argument for the development of multimessenger astronomy, in which the National Centre for Nuclear Research also specialises', we read in the release.

As part of their research, in archival data the scientists found a potential lensed GRB candidate with the catalogue name GRB130831A. The time delay was 500 seconds, which is within the scope of discussed situations. Some details of this phenomenon, however, do not allow for 100% confirmation of the hypothesis. The researchers do not give up and announce further research on GRB130831A. They hope that thanks to the multi-range sky surveys, in particular the monitoring of the whole sky in the gamma range, finding more lensed GRBs is only a matter of time.