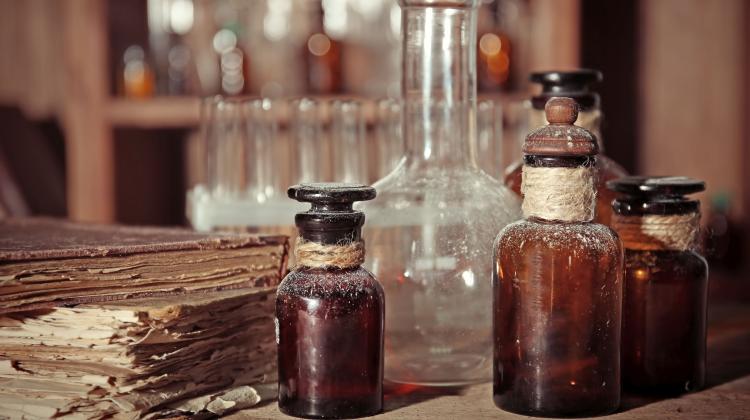 Researchers from the University of Wroclaw and the Wrocław Medical University recreate and analyse medical preparations and 'drugs from an old Polish pharmacy'. They find recipes in diaries, letters, memoirs and private notes dating back to the 16th - 18th century.

The greatest hits of old Polish pharmacies include theriac or theriaca - a concoction commonly considered to be an antidote to poisons (and itself containing poisons), a panacea for infectious diseases, and ultimately - a placebo preparation.

HOW MEDICATIONS ARE PREPARED

'The project concerns the past, so our project is naturally carried out at the Historical Institute of History. On the other hand, research consisting in the analysis of these drugs is beyond a historian's competence, which is why we conduct fruitful cooperation with the Faculty of Pharmacy of the Wrocław Medical University', explains historian Jakub Węglorz.

His task consists in searching for historical information about medicines used in the old Polish age. Then, with a group of colleagues, the researcher reproduces those medicines in a laboratory. Complementary work involves the analysis of the active compounds content and basic biological activity of reconstructed preparations.

'There are lots of these medicines. Of course, not all of them were widely used. Historians determine their recipes, and then together with pharmacists try to translate them into a contemporary language - determine what the names of ingredients mean and how they were made. The next stage is to prepare the drug in a laboratory and analyse its effects', describes Dr. Węglorz.

THERIAC - A HIT OF AN OLD POLISH DRUG CABINET

The historian emphasises that among multi-ingredient medicinal concoctions, theriac has the longest tradition and period of application. It was developed in the 3rd century BCE as an antidote to all kinds of poisons. In 2nd century CE in N.e. Andromachus, emperor Nero's personal physician, improved the recipe by adding viper's flesh. In the Middle Ages, theriac was transformed from an antidote into a panacea and became common on pharmacy shelves and in pharmacopoeias.

Until the 18th century, most doctors recognized the value of this preparation and recommended it both as a medicine against poisons, as well as a measure against infectious diseases, especially plague. The perception of theriac as a great medicine was finally buried in the 19th century.

In the study conducted by a team with the participation of Dr. Węglorz, researchers reconstructed a medicament used, for example, during the Black Death outbreak in Toruń in 1629. The recipe consisted of 61 basic ingredients and three complex preparations. The medicine was one of the most expensive concoctions used at the time. It contained certain ingredients that could have a pharmacological effects, and even ones considered to be poisonous today.

'The main difficulty during our work was to correctly translate plant names used by the pharmacist, which had to be carefully identified and matched to the contemporary botanical nomenclature', explains Dr. Węglorz.

Studies indicate that the theriac used in accordance with the then recommendations could not be poisonous. But did it have healing properties? Preliminary findings indicate that theriac owed its postulated efficacy in the main indications to the placebo effect.

While the medicine does contain substances that have a therapeutic effect, with the recommended dosage their amounts are insufficient to realistically affect human health, summarise the authors of the article 'The real Theriac - panacea, poisonous drug or quackery?', published in the Journal of Ethnopharmacology.

WHERE TO FIND OPIUM AND OTHER SCIENTIFIC DILEMMAS

Acquiring exotic substances that are currently not widely available is a considerable challenge for researchers.

'Some of these ingredients are difficult to obtain for legal reasons. For example, we have a big problem with opium, which is currently under strict control. There are also substances that are no longer used today, such as ambergris, which today is found in trace quantities and is very expensive. There is also a problem with substances obtained from animals or plants that are protected today', describes Dr. Węglorz.

More details about the project are presented in the Polish language video 'Staropolskie leki'.

The research project 'Reconstruction and analysis of medicinal preparations identified on the basis of old (16th-18th century) Polish egodocuments' is financed with a SONATA BIS grant worth over PLN 1.5 million.