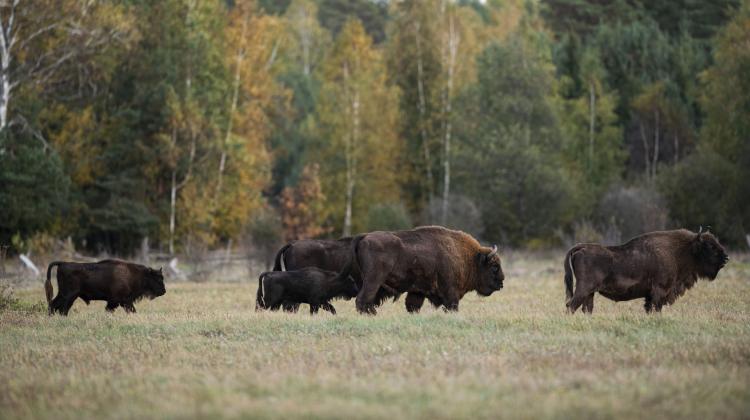 The construction of a wall between Poland and Belarus to stop immigrants will have a negative impact on nature, warn scientists.

Aimed at stopping migrants being forced across the border by Belarusian troops, the 180km wall will also block the migration routes of large mammals in the Białowieża Forest, two scientific institutions in the region say in a letter published in the latest issue of Science.

Professor Bogdan Jaroszewicz, one of the authors of the publication and head of the Białowieża Geobotanical Station of the University of Warsaw, said: “There is no doubt that this is primarily a humanitarian crisis, a human tragedy that needs to be solved.

“But we must not forget that the activities associated with this crisis and securing the border have an impact on ecosystems adjacent to the border, including the unique forest ecosystem of the Białowieża Forest. This effect will be visible for years, for example in the form of garbage (food packaging, water bottles, etc.) left in the forest.”

For weeks, thousands of people from the Middle East have been trying to get into the European Union by way of its eastern border. Their influx has been orchestrated by Belarus' authoritarian regime. In response, Poland is planning to construct a solid border wall along a part of its border with Belarus. The Law on the Construction of State Border Security entered into force on November 4. In the first half of November, the Polish prime minister announced that the work would start in a few weeks. According to the head of the Polish Ministry of Interior and Administration Mariusz Kamiński, the barrier will be built in the first half of 2022. Its estimated cost is PLN 1 billion 615 million, of which PLN 1 billion 500 million is the cost of a physical barrier, and technical devices (perimeter) cost PLN 115 million.

Citing research publications (more - HERE, HERE and HERE), Professor Jaroszewicz shows that border fences block animal migration more effectively than migration of people. He said: “Such data come mainly from the border between the US and Mexico; although the border between Israel and Palestine is also a good example. In general, the more sophisticated the security measures, the more sophisticated (and expensive) the methods of human smuggling become.”

A 2014 study published in PLOS One, in which Jamie McCallum from the British University of Bristol and a consultant of the London company Transfrontier International Limited and his colleagues from Zoological Society of London conducted research on the border between the US and Mexico, used 36 photo traps to collect data on the presence (or absence) of 17 different native and foreign species of mammals including deer, skunk, American black bear, lynx, cattle, dogs, horses and people.

The latter were classified on the basis of the appearance as representatives of services, smugglers or illegal migrants. The authors of the study assessed how each species could move despite the presence of a wall, without its presence, and in the open area (an area with a radius of 500 m from the end of the fence).

Data analysis on native mammalian species revealed that animals such as cougars and coatis appeared more often in the less sealed zones (no barrier). This may mean that the fence is a real barrier for these animals, the authors of the study suggest.

At the same time, people were captured in as many as 283 photos (726 people in total). The probability of the presence of smugglers and migrants in fenced and unfenced areas was the same, the scientists reported after analysing the data from photo traps. McCallum himself admitted that he was surprised that the wall had no effect on the presence of people. 'I thought it would have at least some kind of trace of an effect. Even if it wasn't a statistically significant finding. But it didn't appear to', he emphasized.

The researchers published in Science noted that ‘the humanitarian tragedy becomes a serious threat to the Białowieża Forest’, adding that the forest, a UNESCO World Heritage site stretching on both sides of the Polish-Belarusian border, is one of the last large fragments of the primeval forest of the European Plain. They said that ‘the losses that the presence of the wall will bring may outweigh the expected benefits.’

This is connected to the presence of a unique population of large mammals in the Białowieża Forest, among other things.

The researchers write that to make it difficult to cross the border, Poland initially set concertina wire barrier, which can hurt large mammals and contribute to their death. In the coming months, the concertina barrier will be replaced by a 5 m high, tight barrier, blocking land migration of bear, bison, lynx, wolf and deer. The wall topped with barbed wire can also be a threat to birds. Both fences - the current and the planned one - stop the natural process of forest re-colonisation by brown bear. In recent years, the first case has been described of this animal's crossing from Belarus to Poland.

They said: “The wall would impede the mobility of all large mammals, resulting in loss of genetic diversity and possible escalation of human-wildlife conflicts’, adding that Poland and Belarus are both signatories of the Convention on the Conservation of Migratory Species of Wild Animals. This includes a commitment to protecting migrant species.

The researchers also mention another threat to the valuable ecosystem - the risk of invasion of species. According to the scientists, the militarisation of the border area, accompanied by the construction of infrastructure and increased movement of people and vehicles, also exposes this unique forest to invasive plant species. Their seeds are transported on building materials, shoes and tires, the researchers write.

They also note that the areas occupied by forests and scrubs are conducive to crossing borders unnoticed, so we can expect that migrants' attempts to cross from Belarus to Poland will take place in areas with a high natural value.

The scientists write that fences are not fully effective as a means of preventing people's migration. Their presence, however, does have negative consequences for nature. As an example, the experts mention the border wall between the US and Mexico that destroyed sensitive habitats, including the saguaro, blocked animal migration routes (for example of cougars) and led to the destruction of burial places of indigenous inhabitants of the region. The scientists said: “Worldwide, there are more than 70 border barriers that marginalize people, undermine transboundary collaboration and conservation, and cost billions.

“Better policy is urgently needed that takes the value of nature into account. We call on the European and international communities to respect ecosystem integrity and health when planning responses to human migration crises. We appeal to authorities in Poland and Belarus to consider the shared heritage and outstanding universal value of the primeval Białowieża Forest.”

They added in an interview with PAP: “We are not border barrier experts, so it is difficult to propose specific solutions. But they exist and are used in other such fences (for example on the US-Mexico border); they can either at least enable migration of smaller animals (which can pass through the gaps too narrow for a human), or they can be crossings that also enable migration of larger animals, with adequate protection with electronic devices; final solutions should be developed jointly by the border barrier designer, the Border Guard, land managers and scientists, especially mammalogists; we only draw attention to the fact that while solving the border safety and humanitarian crisis, we must not forget about nature, especially in an object as precious as the Białowieża Forest.”

Co-authors of the text about the threats to nature related to the migration crisis on the Polish-Belarusian border, and the appeal to take into account the needs of nature while trying to solve this crisis, are Dr Katarzyna Nowak from the Geobotanical Station and Professor Michał Żmihorski from the Mammal Research Institute PAS. (PAP)