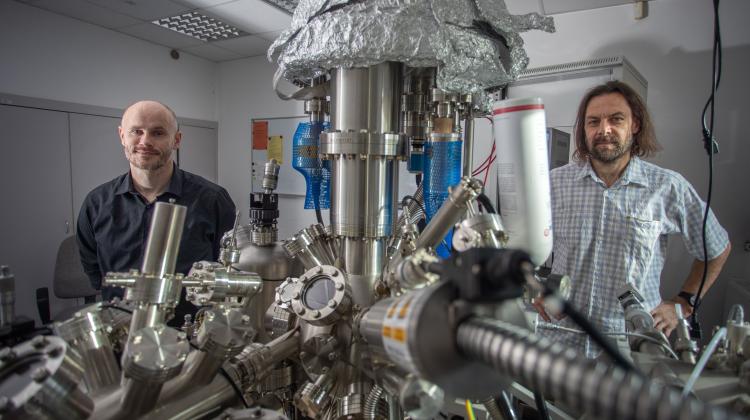 Researchers at the University of Lodz have built a prototype of Poland’s first OLED display with graphene electrode, and one of the few in the world.

The unique solution involves modifying the graphene layer used to produce the electrode with rhenium oxide.

The university’s Dr. Paweł Kowalczyk said: “This is not a theoretical model, but an actual, working device. We have created a transparent structure working with OLEDs that will enable practical application of all flexible electronics solutions.

“We have proven that efficient graphene-based OLEDs can be successfully produced, which gives the chance to produce a display in the future.

Colleague Dr. Paweł Krukowski added that the solution involved modifying the graphene layer used to produce the electrode with rhenium oxide, saying: “It was necessary because while graphene is flexible and 98 percent transparent, it has a wrong work function level, which makes the LED flash.

“Adding a layer of rhenium oxide to the graphene layer allowed to achieve the optimal work function level. (...) No one in the world did that before, molybdenum oxide was used instead.

“We found that graphene with the addition of rhenium oxide layer with a thickness of 3-5 nanometers can be successfully used as an anode in an OLED, giving it adequate energy.”

Now the scientists are working on improving their flexible display by examining its operation in detail. This includes the issue of power supply.

Krukowski said: “It can be powered with 20 volts, but who carries a 20-volt battery? We need 3 volts, the voltage of a small battery. This is one of the things we are working on.”

Graphene is a crystalline form of carbon which has only two dimensions (width and length) and the thickness of exactly one atom. In addition, graphene is flexible, transparent, has a 98 percent light transmittance and conducts electricity and heat very well.

Kowalczyk said: “Today, graphene is a superhit in science and electronics. The possibility of using it to produce OLEDs opens up amazing possibilities for flexible electronics.”