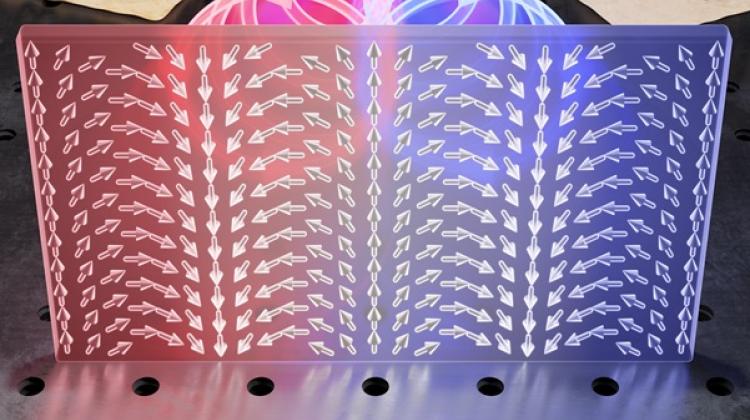 Scientists have demonstrated Young's experiment with light in the reciprocal space for the first time. The pioneering research of an inter-institutional research team was published in Physical Review Letters and highlighted as PRL Editors 'Suggestion.

Young's experiment (from almost 220 years ago) shows that when light passes through two slits in a plate, it creates an image composed of many bands (interference image). The closer the slits are to each other, the further the interference bands are.

In the experiment, the two slits transform information about the light from position space into a set of directions (reciprocal space) expressed by angles at which interference bands are observed. Since 1801, Young's experiment has been carried out not only on electromagnetic waves (photons) from each of the possible ranges of the spectrum, but also on electrons, atoms and even large molecules.

In science, it is probably one of the most frequent proofs of the wave nature of tested phenomena (due to the presence of diffraction on the slits and interference of elementary waves generated behind them), and the validity of the wave-particle duality principle.

Now scientists have shown that a similar experiment can be performed in reciprocal space. In this scenario, light beams emitted in two directions should also generate a periodic interference pattern in position space.

Theoretical analysis of the results is carried out in collaboration with the Institute of Physics PAS (Professor Michal Matuszewski) and the University of Southampton (Dr. H. Sigurdsson and Professor Pavlos Lagoudakis).

Researchers at the Military University of Technology in Warsaw prepared a special optical microcavity filled with optically anisotropic liquid crystal. Microcavity for research and liquid crystal materials were developed and prepared by Professor Witold Piecek, Professor Przemysław Kula, Dr. Rafal Mazur, Dr. Przemyslaw Morawiak from the Department of Chemistry and New Technologies of the Military University of Technology.

The microcavity consists of two nearly perfect Bragg mirrors located so close to each other (the order of micrometers) that a standing electromagnetic wave is formed inside.

By applying electric voltage across the microcavity using transparent electrodes located in the structure of mirrors, the liquid crystal molecules inside could be rotated in such a way that linearly polarized plane wave light passing through the cavity was forced to change its internal state into right- and left-handed circular polarized components.

During the experiment, the researchers observed light leaving the cavity in the form of two beams propagating in two different directions. Each beam was circularly polarized; right- or left-handed. On the surface of the sample (position space) they observed interference pattern of light polarization states for overlapping beams leaving the microcavity, consisting of parallel bands having a predetermined linear polarization.

The observation of polarization states of the light processed in the microcavity (made in the University of Warsaw lab) is similar to Young's double-slit experiment. But this time, the role of slits was played by two distinguished directions of light (parameters in the reciprocal space). According to the authors of the study, it is intriguing that a similar phenomenon was previously observed for electrons - modulation of the polarization of spins of electrons in position space led to the formation of the so-called persistent spin helix. Theoretical analysis of the observations demonstrated that the mathematical description of such a helix for the electron spin and for the polarization of light was the same. Scientists interpreted this phenomenon (occurring in both cases) as a classic entanglement of two degrees of freedom - the direction and polarization of light (spin in the case of electrons).

The observation that the optical microcavity with a liquid crystal separates the polarization of light (the spin of photons) almost coincided with the 100th anniversary of the discovery of spin in the famous 1922 Stern and Gerlach experiment. The presented papers presents an optical analogy of two fundamental experiments of quantum mechanics - Young and Stern-Gerlach.

The paper 'Realizing Optical Persistent Spin Helix and Stern-Gerlach Deflection in an Anisotropic Liquid Crystal Microcavity' appeared on November 1, 2021 in Physical Reveiw Letters. The work was co-financed by the National Science Centre and the project TopoLight selected in the European Innovation Council (EIC) competition Future and Emerging Technologies (FET-OPEN) H2020, whose coordinator is the Faculty of Physics of the University of Warsaw, and the partners are the Military University of Technology, the University of Southampton, IBM Research in Zurich and the French National Centre for Scientific Research CNRS in Paris. Open Access publication prepared with the support of Excellence Initiative - Research University (IDUB) of the University of Warsaw.