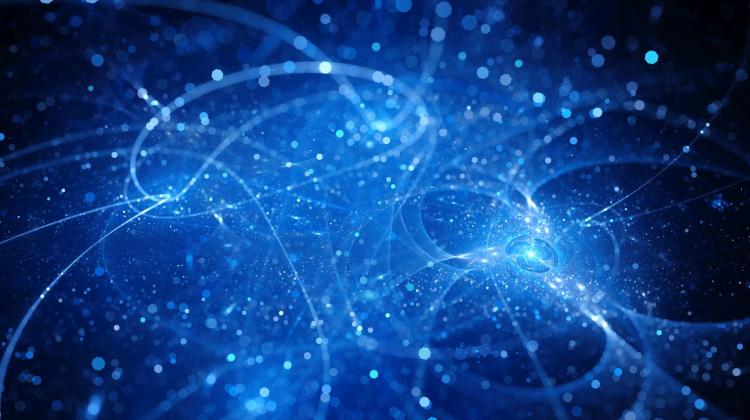 The creators of the J-PET device from Krakow are the first in the world to show how to obtain additional valuable information about the location of lesions. Their method is based on the analysis of processes involving positrons in the patient's body.

PET (Positron Emission Tomography) is a method of imaging the patient's anatomy based on the recorded radiation (photons) emitted from the inside of the human body. In order to perform the scan, the patient is administered a radiopharmaceutical containing a radioactive element - a radioisotope that emits electron antiparticles (positrons) during its decay. The most commonly used radioisotope is fluorine-18. When positrons (antimatter particles) bind to electrons (matter particles), they emit two collinear photons (moving in opposite directions along one straight line). This process is called annihilation, Małgorzata Bankowicz, Wojciech Krzemień and Marek Pawłowski explain in a press release.

The radiopharmaceutical accumulates mainly in the most energy-consuming cells, such as cancer cells. The emitted photons are registered by the scanner, which allows to determine the position of the source of their emission. The process involves recording the place, energy and times of observation of the photon pairs. But a lot of work of algorithms is still needed before a 3D image of the patient's body and cancer cells can be obtained at the end.

Scientists from the Jagiellonian University in cooperation with researchers from the National Centre for Nuclear Research are working on a new generation of positron emission tomography devices called Jagiellonian PET.

The university said: “The photon detectors used in PET use the phenomenon of scintillation. Scintillators consist of atoms that absorb some of the photon energy and convert it into visible light photons, which are then registered by the scanner electronics. This means that instead of one high-energy photon, we register many lower energy photons. The Jagiellonian PET detector technology differs from classic PET scanners. Instead of the more expensive inorganic scintillation crystals (not containing carbon atoms), commonly used in PET technology, it uses organic (containing carbon atoms) plastic scintillators.”

The unique properties of the J-PET scanner make it possible to go beyond conventional PET imaging methods and create a completely new, complementary imaging method that uses quantum effects related to the formation and annihilation of positronium.

A positronium is a short-term system (bound state) of an electron and a positron, similar to a hydrogen atom, in which instead of a proton there is a positron (electron antiparticle, a particle with a positive charge). After a short time, this system annihilates directly or with the participation of an electron from the environment.

Depending on the environment in which the decay takes place (cancer cells create different conditions than healthy cells), the lifetime of the positronium (the time between the emission of the initial photon and annihilation) varies.

As a result, it is possible to distinguish between sick and healthy cells with even greater precision than in classic PET. The complicated process of timing from each detector must be done on the fly so that the examiner can get a useful image quickly, not after many hours of calculations. This is where appropriate computer algorithms come in handy; they build information that is ready to use from the chaotic timing sequence.

The first positronium-based image has been captured at the Total-Body Jagiellonian-PET Laboratory using the prototype J-PET scanner, and scientists from the National Centre for Nuclear Research participating in the Jagiellonian-PET project develop algorithms for image reconstruction.

Dr. Wojciech Krzemień from the High Energy Physics Division of the National Centre for Nuclear Research said: “The participation of the National Centre for Nuclear Research consists in developing image reconstruction algorithms, procedures and programming tools for data analysis, thanks to which we can process these data. This is a very large contribution without which these analyses could not have been done. Our additional contribution to the work on J-PET is using machine learning methods to analyse tomographic data.”

The new PET imaging method is not only cheaper than the currently mass-produced PET devices, but also more precise. The first images in this technique were obtained for a 50 cm phantom of cardiac myxoma tissue and adipose tissue samples. The research authors expect that their method will enable imaging of larger volumes, up to 200 cm long, which will allow to image the entire body at once, while commonly used PET devices are able to image about 20 cm of a part of the body.

PET is used not only in cancer diagnostics, but also for imaging in other diseases, such as heart disease. Scanning the whole body with a J-PET device will help diagnose diseases that cause changes throughout the body, from the earliest stages of their formation at the cellular level. The creators believe that the device can also be used to diagnose complications after COVID-19.

The results were reported in journals including Nature Communications (https://www.nature.com/articles/s41467-021-25905-9) and Science Advances(https://www.science.org/doi/10.1126/sciadv.abh4394). They are also described in a press release issued by the National Centre for Nuclear Research.