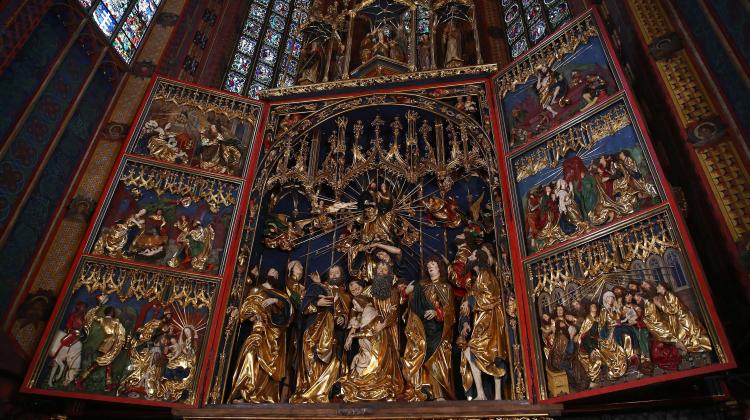 05.02.2021. Presentation of the restored Veit Stoss altarpiece in St. Mary's Basilica in Kraków. During the work on one of the figures, restorers discovered the probable date of its preparation - 1486. (mr) PAP/Łukasz Gągulski

Mystery surrounding one of the most important gothic monuments in Poland has been solved after it was revealed to have been built from 15th century Oak wood.

Using dendrochronological research, the scientists from the Nicolaus Copernicus University in Toruń found that during the restoration of the Veit Stoss altarpiece, the wood used to construct it was obtained in 1479 in the Niepołomice Forest.

Dendrochronology is a scientific method of dating monuments and archaeological finds. It allows researchers to determine the age of the object with great accuracy based on wood samples.

In the case of the Veit Stoss altarpiece of St. Mary's Basilica in Kraków, researchers analysed the oak wood samples from the basic structure of the reredos, the framework profiles and the side planks of the main cabinet.

Professor Jarosław Adamowicz said: “The material of all these elements is primary and homogeneous, it comes from the same tree felling area. The sequences of growth increases indicate the year 1479, when the oaks used to build the altar were cut and seasoned. Taking into account the above, it should be assumed that the altarpiece cabinet was built in the basilica in the year 1481.”

He added that in 1483 Veit Stoss was released from paying taxes in Kraków, and he could only receive such a privilege when the work on the altar was already advanced.

The tests carried out by Professor Tomasz Ważny and Barbara Gmińska-Nowak from the Nicolaus Copernicus University in Toruń show that the oak wood is not the typical wood of this species that was traded in Europe at the end of the 15th century, that is, oak wood from Pomerania.

Adamowicz said: “We can almost certainly say that this is oak wood from the Niepołomice Forest, from the royal forests.

“Thus, the assumptions of many researchers concerning the participation of the royal family in financing the work on the new altar should be considered confirmed.”

Professor Jarosław Adamowicz presented the results of over five years of work (from autumn 2015 to February 2021) to members of the Society for History and Monuments of Kraków.

On the sculpture of Saint James the Apostle, who supports Mary in the Dormition scene, the restorers read the date of 1486 - three years earlier than the altar blessing date accepted in the professional literature. According to specialists, all sculptures from this scene had to be completed by then.

Adamowicz said: “The discovered date inscription was previously not known and therefore not taken into account in the subject literature. This prompts us to look at the history of the construction of the altarpiece. Considering its technological structure, the arrangement of carved details and figures in the central cabinet, it can be concluded that all the main scene figures were completed in 1486.”

Reports of experts in many fields who studied the altarpiece as well as drawing and photographic documentation in the form of 20 volumes of documentation have been transferred to St. Mary's Basilica and to the archives of the Provincial Conservator.

The Assumption of the Blessed Virgin Mary altarpiece by Veit Stoss in St. Mary's Basilica in Kraków is one of the most important gothic monuments in Poland. All structural elements, all sculptures and carved details were restored. Their original colours were uncovered, all elements cleaned from dirt, repainting, retouching and additions added over more than 500 years.

The changes include: shade of the blue background in the quarters and the main cabinet of the altar, the arrangement of supporting characters in the main scene and the colour of frames of individual quarters. The colours are closer to those the altar had at the end of the 15th century.

Research and conservation of the Veit Stoss altarpiece cost over PLN 14 million. They were co-financed by the Social Committee of Renewal of the Monuments of Kraków, the Ministry of Culture and National Heritage, the Municipality of Kraków and the St. Mary's Parish.