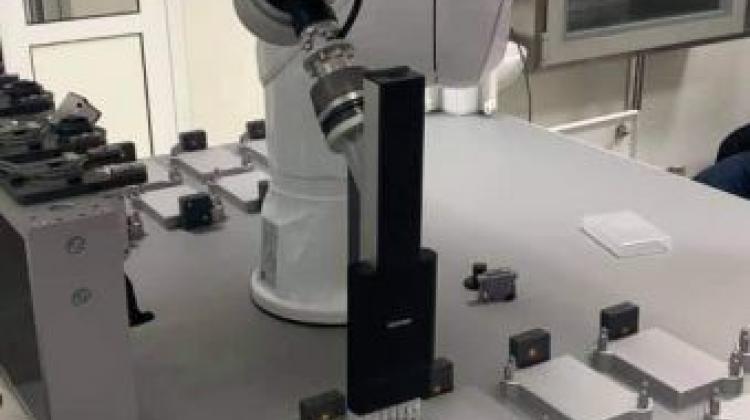 An advanced robotic arm to test COVID-19 antibodies has been revealed at the Wielkopolska Centre of Advanced Technologies at the Adam Mickiewicz University in Poznań.

The university's first robotic arm will be used in both immunodiagnostics and 3D bio-printing.

Team leader Dr. Jakub Rybka, who specialises in the use of nanomaterials in biotechnology and biomedical engineering, said: “We have worked on this device together with Rob-Tech and Cellivia companies for half a year as part of our project.

“It was primarily designed for immunodiagnostic test that we developed last year at the Adam Mickiewicz University, but the possibilities of expanding this robot are virtually unlimited.

“We have already implemented the second scientific area from our laboratory, that is, 3D bioprinting.”

He added that while plastics and other polymers are normally used in 3D printing, his laboratory also prints with cells and that using the device in tests that detect antibodies against COVID-19 and, consequently, automation of this process, not only accelerates the process itself, but also improves the currently used tool by eliminating potential human errors.

The mission of the Laboratory of Applied Biotechnology of the Wielkopolska Centre of Advanced Technologies at the Adam Mickiewicz University is going beyond the limits of basic science and combining academic discoveries with real-life applications.

He points out that the team strives to cooperate with both scientific and industrial partners to drive innovation in biotechnology.

She added that the Wielkopolska Centre of Advanced Technologies proved again that it was a leading centre connecting scientific research with real needs and challenges facing humanity.