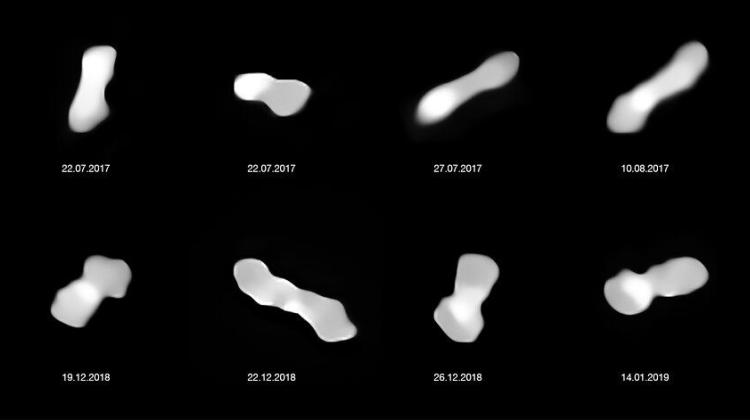 Eleven images of the asteroid Kleopatra viewed at different angles as it rotates. The images were taken at different times between 2017 and 2019 with the Spectro-Polarimetric High-contrast Exoplanet REsearch (SPHERE) instrument on ESO's VLT. Credit: ESO/Vernazza, Marchis et al./MISTRAL algorithm (ONERA/CNRS).

An international team of astronomers studying a huge ‘dog bone’ shaped asteroid called Kleopatra has it is bigger than they previously thought.

Studying 11 images taken between 2017 and 2019 with the European Southern Observatory’s ‘Very Large Telescope’ (VLT) in the Atacama Desert in Chile, the scientists which include astronomers from the Adam Mickiewicz University in Poznań found one of the lobes to be larger than the other, and the length of the asteroid to be approx. 270 kilometres.

The object orbits the Sun in the Asteroid Belt between Mars and Jupiter. Ever since the first radar observations around 20 years ago, astronomers have been calling it a 'dog-bone asteroid' because of its shape. It has two lobes connected by a thick 'neck'. In 2008, team leader Franck Marchis and his colleagues discovered that Kleopatra was orbited by two moons, named AlexHelios and CleoSelene, after the Egyptian queen’s children.

The astronomers found that the asteroid’s density is less than half the density of iron, leading them to believe that Kleopatra has a metallic composition as this low density suggests that it has a porous structure and could be little more than a 'pile of rubble'. It could have formed when material re-accumulated following a giant impact.

The asteroid’s rubble-pile structure and the way it rotates also help to determine how its moons could have formed. The asteroid rotates almost at a critical speed, the speed above which it would start to fall apart. Even small impacts may lift rocks off its surface. Those rocks could subsequently have formed AlexHelios and CleoSelene, meaning that Kleopatra has truly 'birthed' its own moons.

Polish astronomers from the Adam Mickiewicz University in Poznań include Dr. Edyta Podlewska-Gaca, who collected photometric observations made on small telescopes (light curves), which, together with images from the SPHERE instrument mounted on the VLT telescope, are used to model the shapes of asteroids, determine their physical parameters and dynamic history.

Poznań astronomers specialize in asteroid research. They have developed and use a unique, genetic algorithm-based method for determining asteroid shapes.

Dr. Podlewska-Gaca said: “This method works very well in modelling of non-convex objects, which helps us to reproduce recesses or large craters on the surface of asteroids. Thanks to this method, we can verify and improve models obtained using other methods.”

She added that the shapes of the asteroids are most often determined by light curves obtained for various axis positions of the object in relation to the observer. This allows them to observe an asteroid at various angles, which gives a slightly different shape of the light curve. These brightness changes contain valuable information about the shapes of objects.

She said: “Determined models of asteroids can be verified by observing the stars obscured by the asteroids or by high resolution imaging with adaptive optics, which is what we did in the case of Kleopatra.”

The results are described in two papers published in the journal Astronomy & Astrophysics. (PAP)