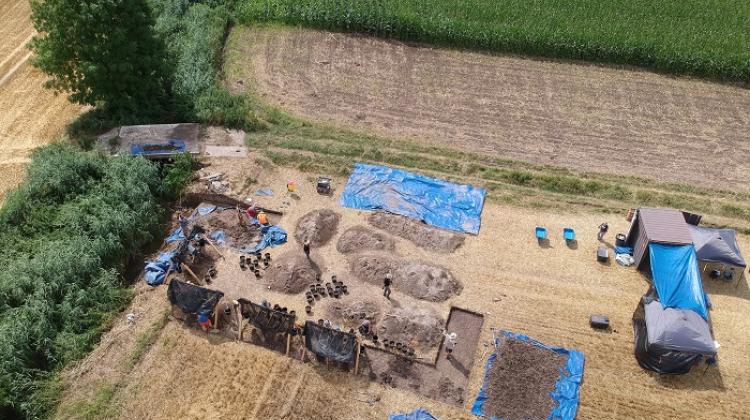 Human remains and fragments from the wreck of an American bomber shot down over Lower Silesia at the end of World War II have been discovered by an American-Polish team.

Working near Jordanów Śląski in Lower Silesia, the American Department of Defence and scientists from the University of Wrocław joined forces to examine one of the lesser-known mysteries of the region's WWII history.

At the end of July, a search began for the American B-17 bomber shot down in March 1945.

The seven-man crew all went missing.

Now, with the help of the university scientists, they have uncovered human remains and fragments of the wreck.

Research work ended in the beginning of September and a continuation is scheduled next year.

The human remains will be sent to the US for further laboratory tests, while fragments of the aircraft and its equipment will be presented in 2022 at an exhibition at the Museum of Archaeology in Wrocław.

According to Alex De Georgey, the Department of Defence’s head of field work, the location of around 36,000 Americans reported missing in Europe during WWII are now known.

Professor Maciej Trzciński is coordinating the project on behalf of the University of Wrocław. Students and employees of the university, specialists, including archaeologists  and forensic archaeologists, took part in the project.

Students participated in archaeological works, repair activities and terrain research. Inter-faculty (the Faculty of History and the Faculty of Law), post-graduate forensic archaeology studies were launched at the University of Wrocław in 2012.