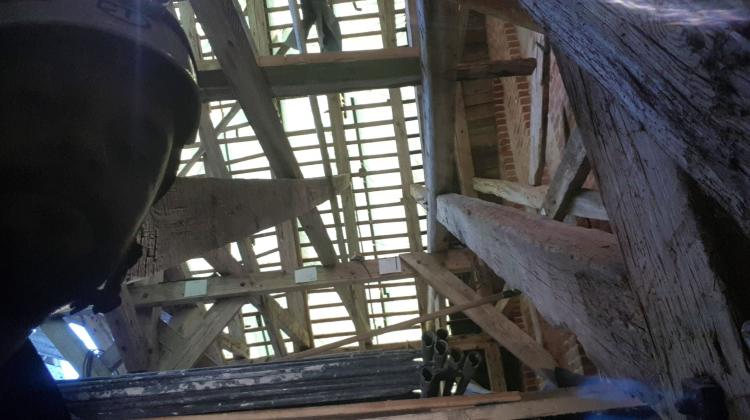 The truss of the cathedral turned out to be much older. Credit: M. Prarat

The attic of a 13th century cathedral has been found to contain the oldest known roof truss in Poland.

Originally thought to have been a modern-day construction, conservators from the Faculty of Fine Arts of the Nicolaus Copernicus University in Toruń made the incredible discovery after being called in to examine the state of the attic.

Dr. Maciej Prarat said: “We did not expect such a discovery. At the request of the West Pomeranian Provincial Conservator of Monuments, we were to assess the value of the timber roof truss (the roof support frame - ed. PAP - Science in Poland) of the cathedral in Kamień Pomorski. When we entered the attic, we immediately noticed the unusual, archaic construction style.”

He added: “The truss has retained the structure from the 13th century. However, during the more than 650-year history of the temple, wooden elements were replaced in many places or new reinforcements were added.

“Our analyses show that they were brought from the nearby island of Wolin. There are even traces of floating on many elements. These are two small holes used to connect the logs with ropes while floating.”

The cathedral in Kamień Pomorski is considered the oldest religious building in Western Pomerania with previous analysis of the temple focused mainly on its medieval walls.

The temple dates back to the 12th century. After the conquest of Pomerania by Bolesław III Wrymouth, the Bishop of Bamberg, St. Otto christianised the area in the years 1124-1128 and a bishopric was established in Wolin in 1140.

As a result of the Danish invasions, the bishopric was then moved to Kamień Pomorski, where in 1176 Casimir I, Duke of Pomerania, founded a new cathedral, the roof truss of which is now being analysed by Toruń conservators.

Prarat said: “It never occurred to anyone that the roof truss also comes from the period.”

Expert (dendrochronological) analyses of more than 30 samples provided confirmation. They show that the truss above the aisle crossing was made of timber cut in the years 1260-1268. The wood elsewhere, above the nave, was cut later, in the years 1360-1361. But a preliminary examination of the chancel roof suggests that the timber for its construction may come from the first half of the 13th century.

Prarat said: “The construction of the chancel and the nave crossing, in several periods, was finally completed by the 1360s, as the results of our research confirm. The nave was roofed a hundred years later'

The analyses show that the structural system and the carpentry technique used during the construction of the roof of the cathedral in Kamień Pomorski are unique in Poland.

They appear in German-speaking territories in the 13th and 14th centuries, the carpentry workshop techniques of which probably came from there.

Scientists analysed the timber used to build the roof and found that axes, hatchets and saws were used to process it. Prarat said: “This set of tools was used until the 19th century. The carpentry solutions, which were quite archaic and time-consuming, also pointed to the medieval origins of the structure. They were not as repeatable and universal as those used in later times.”

In addition, carpentry marks intended to facilitate assembly were spotted on many elements. Their location and form are also unheard of in later times, the conservator added.(PAP)