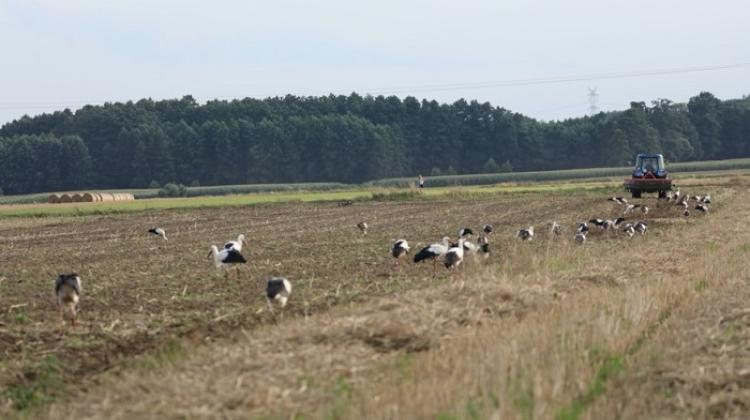 Ornithologists in Poland have been studying storks to try and understand their autumn migration habits.

Until now, where they fed and when they decide to migrate was little understood.

During several seasons, almost 5,700 storks were located in groups of two to 200 birds, most often spotted in arable fields, slightly less frequently in meadows, and occasionally in villages and on trees.

Adult birds were the majority in flocks, accounting for 56 percent of all observed birds. The remaining part were this year's young. In total, 533 ring numbers were read, allowing the researchers to determine that the average distance the birds fly to the autumnal groupings in the Opole region is 277 km.

Birds from Silesia and the eastern Lands of Germany dominated in flocks. But there were also birds originating in Sweden, where the effective reintroduction of this species was undertaken in the last quarter of a century.

After the extinction of the local population in 1955, Polish birds were among those used to restore storks to the Swedish landscape. Apparently they (and their offspring) can still choose to migrate through Poland.

Lead researcher Joachim Siekiera from the Silesiana Research Group said: “We looked at the groups of storks from a bird's eye view, almost literally.

“We used a small Cirrus plane, flying over the entire Opole region and recording information about the storks seen from above. Then we informed our colleagues on the ground so that they could drive closer to the flocks and gather relevant data.

“From above, feeding storks are only black and white spots, while from the ground, through a telescope, we can not only count them, but also try to detect ringed birds.

Professor Piotr Tryjanowski from the Poznań University of Life Sciences continued: “Let me start by saying that this is not only a hobby fun of stork enthusiasts, but an attempt to tackle a very serious problem of nature protection.

“Autumn migration is quite a challenge, especially for young, this year's birds. +Discussing+ the problem with older birds, imitating their behaviour significantly increases their chances of survival of the long journey to Africa'.

The storks’ feeding grounds are important not only for the local population, but also for birds from distant areas. In the case of the study area, these are individuals from the west and north. The birds then continue to migrate together through the east migration route, avoiding the Tatras and other higher parts of the Carpathians, flying through the Balkans and Israel to central Africa.

Publishing their findings in the specialist scientific journal Bird Study the researchers said: “Our research is yet another example of cooperation between professional ornithologists and amateurs.

“Actually it is another example in the case of a white stork, because this species has always been a citizen science topic. In the case of this particular project, we are dealing with the combination of classic and very advanced technologies regarding the acquisition of research material and data analysis.

Find out more in the source publication: