Scientists discover cause of severe COVID-19 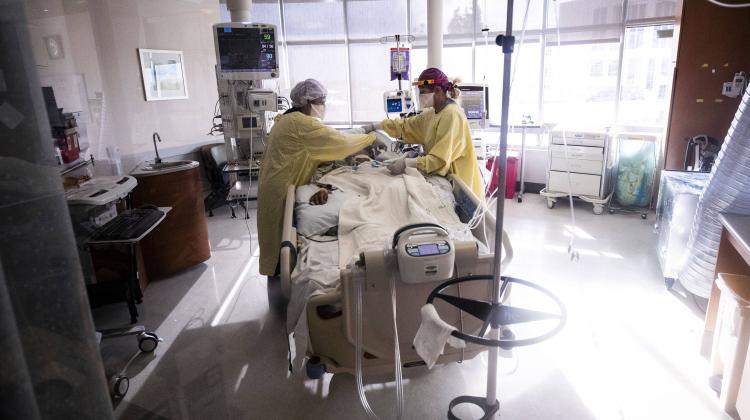 Scientists have found that one of the causes of severe COVID-19 could be congenital abnormalities in the functioning of the immune system.

The discovery could mean that those most at risk from COVID-19 can be identified almost immediately.

Carried out by an international team of researchers, the COVID-19 Human Genetic Effort show that autoantibodies neutralizing certain types of I IFN have been detected in the blood of some people suffering from severe COVID-19.

They have been found in at least 15 percent of all patients hospitalised due to a very severe course of the disease, some of whom died.

The study’s supervisor, Dr. Paweł Zawadzki from the Poznań scientific start-up MNM Diagnostics, said: “Interferons are small proteins of our immune system that have a key role in the response to viruses, including the SARS-CoV-2 virus.”

Many patients were found to have these autoantibodies in very high concentrations. In a group of people over 80 years of age, they were detected in over 20 percent of subjects. Researchers found that mainly men over 65 years of age had antibodies against own-type I IFNs. They constituted 95 percent of people who have them in the study group.

Such antibodies have not been found in a single patient in the mild or asymptomatic COVID-19 group. In addition, researchers found that the production of these specific autoantibodies is undoubtedly genetically determined and likely to start in childhood. In some patients, they were detected in the blood before the onset of COVID-19.

Dr. Zawadzki said that this could “explain the severe course of the COVID-19 disease also in some young people.

“We already know that people with a rare genetic disease, in which the immune system is impaired, called APS-1 (autoimmune polyendocrine syndrome type 1), also have type I IFN autoantibodies, which means that this group of patients may be at particular risk of severe COVID-19.”

The situation is similar among people with congenital defects of the interferon immune response (including the response dependent on certain TLR3 and TLR7 gene variants, as well as the action of dendritic cells) - autoantibodies have also been detected, regardless of the age of the patients, the researcher adds.

According to the authors of the studies, the more frequent severe course of COVID-19 in men may be explained by the fact that TLR7 is encoded by a gene on the X chromosome gene, and its pathogenic variants result in an impaired interferon response in some viral infections.

The discoveries of the COVID-19 Human Genetic Effort consortium have already been confirmed by other research groups from around the world, including the groups from Amsterdam, Lyon, Madrid and San Francisco.

The research is extremely important and, importantly for patients and doctors, it has almost immediate application in the current, uncertain epidemic situation as the level of antibodies in the blood can be determined in any modern laboratory and quickly identify the patients at risk of severe COVID-19 .

The results of the consortium's work was published last week by the prestigious journal Science Immunology, and included clinicians from the Central Clinical Hospital of the Ministry of Interior and Administration in Warsaw, led by Dr. Zbigniew Król, and scientists under the supervision of Dr. Zawadzki.