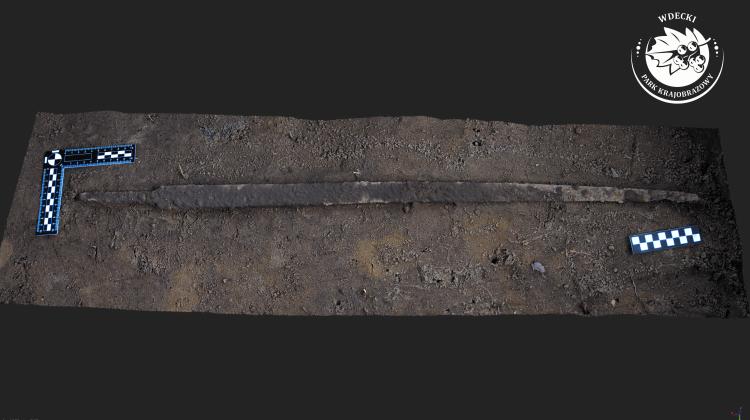 Photogrammetric model of the long combat knife at the site of its discovery (credit: M. Sosnowski)

A rare Scandinavian combat knife dating back to the early viking period has been found at a former ‘lost’ battlefield in Poland.

The discovery was made by archaeologists working in the Wda Landscape Park (Kujawsko-Pomorskie) where in 1091 prince Władysław I Herman fought a battle against the Pomeranians somewhere on the Wda River, near the mysterious town of Drzu.

After analysing the topography and the likely course of the old routes, they selected an area around the town of Gródek for archaeological research, expecting to find traces of events from 1,200 years ago.

Instead, they found the 8th century combat knife measuring 90cm with an 80cm-long blade.

Archaeologist Mateusz Sosnowski said: “As you can see, the weapon's size is impressive for a combat knife, it could easily measure against double-edged swords from that period.”

Analysis revealed that the weapon was most likely a rare Norwegian ‘langsax’, the Old English word for ‘knife’.

Sosnowski added that the blade was in perfect condition with only the tip being ‘bent’.

“Perhaps this trace will provide us with an answer to the history of this langsax. Initial inspection of the bent blade indicates that the damage was not caused by events that took place after the abandonment of the weapon,” he said.

But he added that the discovery was a ‘loose find’.

He said: “We intend to carry out detailed metallographic tests that may allow us to gain additional knowledge about this unique weapon specimen.”

A similar discovery was made in 2015 in Haukela in western Norway.

The ‘Polish langsax’ has now been sent to monument conservators for further analysis.