History & Culture
This text can be copied
Agnieszka Kliks-Pudlik 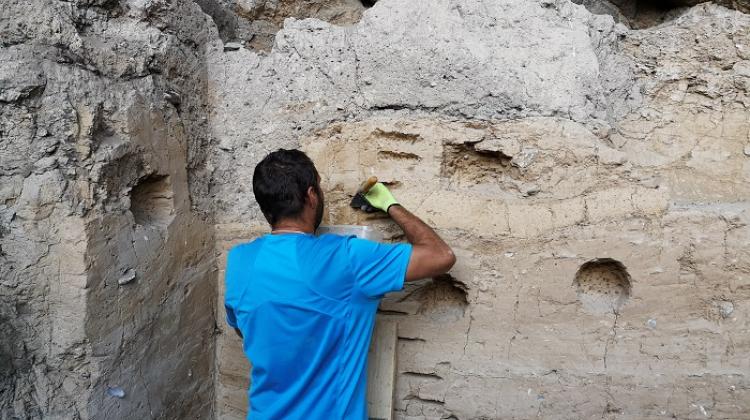 It is very rare for cave sediments containing valuable archaeological finds to survive for thousands of years unchanged. But this is the case of the Chagyrskaya Cave in the Altai Mountains, where the remains of Neanderthals were recently discovered.

According to Dr. Maciej Krajcarz from the Polish Academy of Sciences who is investigating the geological context of these discoveries, caves are unique sites for archaeologists.

The former shelters of humans are now referred to by researchers as sedimentation traps as sediment can survive there for thousands of years without being blown away by wind or washed away by rain.

At the same time, these sediments very rarely remain unchanged, they do not lie 'layer by layer', but are displaced, and often mixed up - the older and the younger ones, or the layers containing archaeological materials mix with the sterile ones.

Dr. Krajcarz said: “Cave sediments can be affected by many disturbance processes, from mass movements, i.e. usually slow descent on an inclined slope, to bioturbations, such as animals digging holes by and thus disrupting the original system, to frost processes, i.e. water freezing in the ground which was particularly intense during the glacial periods. If we are talking about Palaeolithic sites, there was enough time for these processes to work many times and in various combinations.”

Geoarchaeologists deal with the identification of these processes. Krajcarz added: “Our task is to understand the entire context of a given archaeological find. For an archaeologist trying to reconstruct prehistory, it is crucial to know whether the finds are in their original position, whether they are where ancient humans left them. Only then it is possible to carry out further, advanced reconstructions of the cave arrangement, for example the locations of the hearth, flint workshop, places to sleep.:

He continued: ”My and my team's research, including that in the Altai, shows that virtually all cave sediments are disturbed in some way, and most of them are large packages that had been moved from one place to another inside the cave.

“So these are still cave sediments that have formed in a given cave and are still there, but they are no longer in their original place and do not have their original structures. This, in turn, leads to the distortion of the original archaeological sites and the mixing of materials from various layers, some of them many thousands of years apart.”

An example is the Chagyrskaya Cave in the Altai Mountains. Krajcarz said: “This area in Central Asia is of interest especially to archaeologists who study the oldest periods of the Palaeolithic. It was there that a few years ago, a previously unknown, extinct species of archaic human, known as the Denisova hominin, was discovered. In addition, it turned out that Neanderthals, our sister species, also lived in that area.

“They were previously believed to have been geographically restricted to Europe and the Middle East. As a result of research in the Altai, it turned out that they had also reached Central Asia, including to the Chagyrskaya Cave.”

Dr. Krajcarz's team is trying to understand how Neanderthal remains and remains of stone products accumulated there. He said: “Excavations have shown that we have a series of layers in the cave that have accumulated over the millennia, with stone tools and Neanderthal remains found in many of them. We explained this puzzle in part by studying microscopic features of the sediments. The original archaeological level was eroded and repeatedly displaced from other parts of the cave and, as a result, this archaeological deposit was multiplied in the newly deposited layers.

“Another mystery was that under the layer with Neanderthal products there were completely different river sediments from a different period; this sediment was several hundred thousand years older, but also contained similar archaeological material. We wondered how to interpret it - perhaps the Neanderthals had been in Altai much earlier and returned to this place. “This was unlikely, however, as it would mean that the toolmaking technique survived unchanged for millennia. My research showed that the materials found in the sediments of river origin got there secondarily from the upper layers as a result of frost processes, that is, the shrinkage and cracking of the sediment as a result of the development of soil ice.”

Field research in the caves of Central Asia conducted by Dr. Krajcarz's team are part of a project called 'Stratigraphy, Deposition and Post-Deposition Processes in Palaeolithic Cave Sites in Central Asia', financed by the National Science Centre.