Natural fires in the Mediterranean constitute no more than 1-5 percent, says environmental biologist 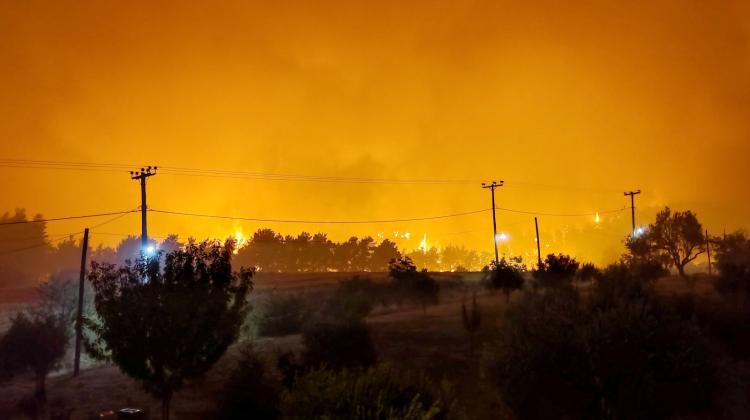 Although fires in Turkey are part of a cyclical scenario that repeats throughout the Mediterranean, according to estimates these wildfires constitute no more than 1-5 percent of all fires, says Dr. Małgorzata Suska-Malawska from the University of Warsaw.

Recent data indicate that the average annual number of forest fires throughout the Mediterranean is approx. 50,000, about twice as many as in the 1970s. The exact assessment is difficult due to the different methodologies of recording fires in different countries. Some sources say there has been approximately a three-time increase in the number of fires in Spain or Italy since the end of the 1950s (an increase from 1,900 to 8,000 recorded in Spain, from 3,400 to 10,500 in Italy). The least fires were recorded in Greece (an increase from 700 to 1,100) and Turkey, where they happened mainly in southern areas (increase from 600 - to 1,400).

Dr. Suska-Malawska, director of the Institute of Environmental Biology at the Faculty of Biology at the University of Warsaw said: “By stealing and transforming the landscape, also for tourist purposes, man is now the largest factor that increases the risk of fires. In the last decades, fires have been more frequent and more intense.”

In example she points to the area of Antalaya, Turkey, where the frequency of fires has been studied since the end of the 1950s and shows the number of fires increases every 6-8 years.

According to Suska-Malawska, while the number of fires increases, the size of burned areas systematically decreases thanks to modern fire extinguishing methods. The largest fire recorded in the area of Antalaya since 1938 happened in 2008, when about 16,000 hectares of land burned down.

Fires - mainly forests in the southern coast of Turkey - have been happening regularly every few years for a few decades. Similarly to other countries in the Mediterranean, they are the result of many factors. Among them are climate change (heat) and progressive anthropopressure, or the impact of man, consisting in drastic transformation of the natural landscape for the needs of tourism and the growing population.

Suska-Malawska said: “All this increases the risk of fires, both wildfires, the cause of which may be self-ignition or a lightning strike, as well as accidental fires, usually caused by tourists.

“Dry litter and trees burn fast, and dry winds instantly move fire from place to place. The scenario of occurrence of fires in the countries of the Mediterranean - and not only there, it generally concerns dry and semi-dry areas - each time is similar.”

She added that fires are an inseparable part of nature and many ecosystems (like grassy, dry areas, such as savannas) are shaped by them to some extent.

She said: “Although countries improve and introduce new fire prevention and management systems, etc., during drought, lack of rainfall, when there is a fire, we see what is happening now in Turkey, and before that in Greece, Spain, or two years ago in Australia.”

In Poland, the bog fires that destroy valuable natural areas, for example on the Biebrza, are extremely difficult to extinguish. The last such fire took place in April 2020. Due to drought and probably accidental fire caused by man, approx. 5,500 hectares of wetlands burned down in the Biebrza National Park. The fire appeared in a relatively well-preserved and damp region of the park (Red Swamp Reserve), so it was a surface fire and could be extinguished quite quickly. Subsurface peat fires are much more dangerous.

Suska-Malawska said: “Peat bogs are very difficult to extinguish for two reasons. First of all, wheeled fire fighting equipment can not enter because cars get stuck in the marshy surface. The only possibility is extinguishing from the air, hampered by clouds of smoke. The second group of reasons is associated with the nature of peat. Peat, like coal and lignite, is a fossil fuel, although a less efficient one and now practically not used for this purpose. But when there is a peat bog fire with peat layer that can be a few meters deep, a subsurface fire can burn for a very long time, a few months, and even years - alternately smouldering under the surface, dimming and exploding again.

“The vast majority of low peat bogs in Europe have been drained, causing irreversible destruction of these ecosystems. Disappearance of rare plant species from drained peat bogs is not the only result. The risk of a fire also increases, during which peat is ignited, this is called a subsurface fire.”

In Turkey, 119 fires have broken out in 32 provinces since Wednesday, July28. Extinguishing continues in Antalya and Muğla on the Mediterranean and in Tunceli in the eastern part of the country. In Greece, forests fires reached the suburbs of Athens and the area near Patras. In 2018, over 100 people died as a result of fires. Forests are also burning in the Italian region of Abruzzo, in Pescara, Sicily and Apulia.

Fires are also a big problem in Portugal. The record area of forest and crops burned down in 2017. In total, between January and October of that year, fires destroyed over 442,400 hectares of land.