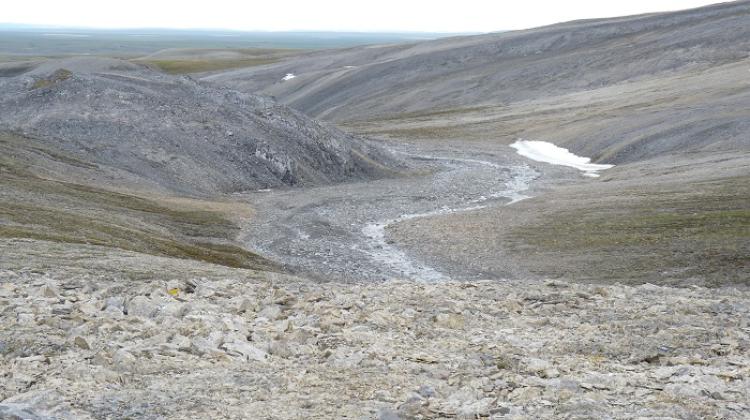 Methane gases released into the air from Siberian limestone after last year’s heatwave has a much stronger effect on global warming than carbon dioxide, say scientists.

Previous forecasts showed that by 2100, greenhouse gases derived from thawing permafrost would contribute to global warming by 'only' about 0.2°C.

This assumption will now have to be revised say scientists from AGH-UST in Krakow, the University of Bonn and the Russian Geological Research Institute in St. Petersburg who determined that after the heat wave in 2020, the concentration of atmospheric methane in Siberia increased.

The results of the study were published in the journal Proceedings of the National Academy of Sciences (PNAS). The conclusions from the study raise further questions, including what effects the last year's heat wave in Siberia will have on the world's climate.

Permanently frozen soils of permafrost include large areas of the Northern Hemisphere, in particular North Asia and North America. If they thaw, it can be a threat, because CO2 and methane are released during thawing, and this intensifies the effect of greenhouse gases of anthropogenic origin.

Professor Nikolaus Froitzheim from the Institute of Geosciences of the University of Bonn said: “Methane is particularly dangerous here because its warming potential is many times higher than that of CO2.”

Professor Jarosław Majka from the Department of Mineralogy, Petrography and Geochemistry, Faculty of Geology, Geophysics and Environmental Protection AGH-UST added: "Our observations of thermogenic methane emissions are particularly important, because the current models only took into account the methane of microbiological origin from thawing permafrost.

“The heat wave that affected Siberia may repeat in other polar regions where similar rocks are found.

“This applies, for example, to north-western part of Alaska, Baffin Island or Spitsbergen, where geologists from our university have been conducting research since the early 1980s. If our hypothesis is correct, such emissions can significantly affect global climate change.”

Most previous studies only concerned emissions from the decomposition of plant and animal remains in the permafrost. The current research conducted under the supervision of Professor Froitzheim focuses on comparing the concentration of atmospheric methane in Siberia, obtained by satellite spectroscopy, with geological maps. Researchers have discovered significantly increased concentrations in two areas of North Siberia: the Taymyr fold belt and the outskirts of the Siberian craton. An important part of these two extensive areas is their substrate, formed by limestone formations from the Palaeozoic (ca. 541 million to ca. 251.9 million years ago). 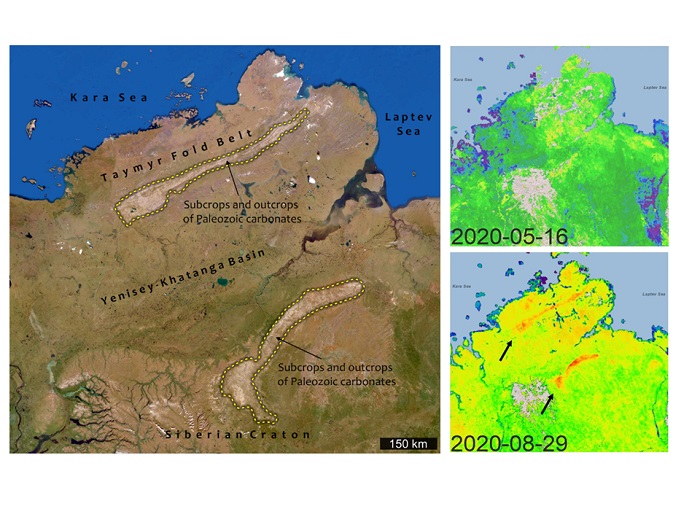 Professor Majka said: “Our work is an example of an interdisciplinary approach to the issue of methane emission from thawing permafrost. Only thanks to a solid education in the field of geology, we could quickly associate seemingly very distant phenomena, i.e. increased methane concentrations in the atmosphere and the geological structure, including the occurrence of rocks containing methane hydrates. Climate scientists are involved in further research. This scientific dialogue will allow us to expand the knowledge about the role of thermogenic methane in the processes occurring in the atmosphere and quantitative clarification of the values of future emissions of this important greenhouse gas.”

In both areas of Siberia, increased concentrations appeared during the record heat wave of summer 2020 and persisted for subsequent months.

Professor Froitzheim said: “The soil formations in the observed areas are very thin to nonexistent, making methane emission from the decay of organic soil matter unlikely.”

The professor and his colleagues therefore suggest that fracture and cave systems in the limestone, which had been clogged by a mixture of ice and gas hydrate, became permeable upon warming.

Froitzheim said: “As a result, natural gas being mainly methane from reservoirs within and below the permafrost can reach the Earth's surface.”

Researchers plan to explore this hypothesis by measurements and model calculations to find out how much and how fast natural gas may be released.

Froitzheim continued: “The estimated amounts of natural gas in the subsurface of North Siberia are huge. When parts of this will be added to the atmosphere upon thawing of the permafrost, this could have dramatic impacts on the already overheated global climate.”