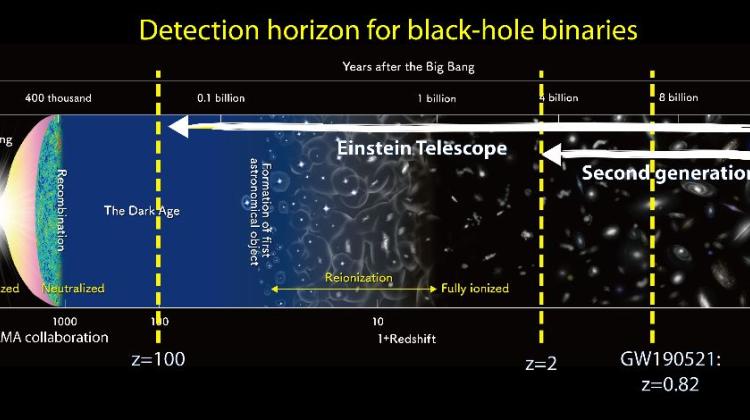 A telescope which for the first time will make it possible to explore the cosmic history of the Universe has been chosen as one of the key initiatives for building the world's most advanced research infrastructure in the EU.

Shedding light on open questions of fundamental physics and cosmology, the Einstein Telescope, a future underground observatory for gravitational waves, will be much more sensitive than existing ones with over three times longer interferometer arms and will be packed with the latest technology.

Professor Tomasz Bulik from the UW Astronomical Observatory, the leader of the Polish Einstein Telescope consortium, said: “This marks a great leap forward on the path to make the Einstein Telescope a reality. I have huge hopes for the science we will be able to accomplish. Additionally, this opens the door for greater involvement of Polish science and industry in this exciting project.”

Professor Dorota Rosińska from the Astronomical Observatory of the University of Warsaw added: “The construction of the Einstein Telescope will launch gravitational-wave astronomy into the golden age.

“The Einstein Telescope, with its extremely high sensitivity, will give us a unique opportunity for new and unexpected discoveries. It will detect all stellar mass black hole mergers in the Universe, allow us to probe the inside of neutron stars, test the General Relativity Theory, study the very beginning of the Universe and solve many other crucial problems in astrophysics, cosmology and fundamental physics. The construction of the Einstein Telescope will launch gravitational-wave astronomy into the golden age.”

They installed networks of seismic sensors (developed by the Polish group) optimised for underground measurements in several candidate sites in Poland, Spain, Hungary and Italy. They are currently involved in the detailed characterisation of the Sos Enattos site in Sardinia, which, together with Euregio Meuse-Rhine, is a candidate site for the construction of a telescope. The site is to be selected by 2024 and must take into account the feasibility of construction and the influence of the local environment on detector sensitivity and performance.

With the ESFRI selection, the project will enter the preparation phase, with construction commencing in 2026 so that observations are possible in 2035.

The study of gravitational waves is a promising new field of science that expands knowledge about the Universe and its processes. Scientists from many centres are striving to build next-generation gravitational wave detectors with ten times greater sensitivity compared to the already operating LIGO and VIRGO detectors.

The University of Warsaw website said: “Gravitational waves were detected for the first time in 2015 and provide a new way of studying the Universe. Until their first detection, scientists could only study the Universe by looking at light or radiation, but with gravitational waves, they can observe vibrations of spacetime itself.”

Gravitational waves were first observed in 2015. Their existence was predicted a hundred years earlier by Albert Einstein. The scientist did not expect, however, that they would ever be registered. (PAP)