Cities need more greenery to protect them from heat and drought, warn scientists 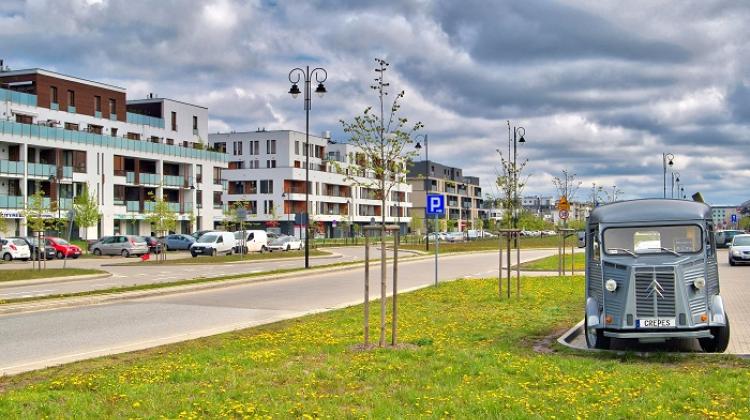 Researchers from the Faculty of Earth Sciences and Spatial Management at the Nicolaus Copernicus University in Toruń examined spatial development plans in 39 Polish cities with over 100,000 residents and concluded that things were going ‘in the wrong direction.’

Quoted on the university’s website, Dr. Krzysztof Rogatka, Tomasz Starczewski and Mateusz Kowalski said: “In theory, we know perfectly well, in which direction our cities should go, we realize that the future is green, but when it comes to implementing our plans, we often fail to treat the surrounding space as a common good.

“We do not realize that the actions taken, for example, widespread concrete domination, i.e. excess concrete in the city space, are steps in the wrong direction.”

They added: “After the communist period, we got a little carried away with the transformation and the possibilities it brought. The effects of this are visible around us. We do not treat space as a common good, everyone builds whatever they like - colourfully and cheerfully. We lack artistic and spatial education.”

In the first theoretical and empirical attempt to analyse and evaluate the planning situation in Poland after 1989 in the context of the concept of urban resilience, the scientists argue that at the stage of creating local spatial development plans, it is important to allocate the appropriate amount of space for rows of trees, because they protect us against the heat, among other things.

They said: “The fact that we have increasing problems with water shortages should result in designing basins in green areas to collect excess rainwater and gradually release it during droughts.

“Remember that the surface runoff of rainwater during heavy rainfall, especially on a surface made of concrete, is huge. When designing new roads and buildings, we should leave space for greenery, which also stores water, and allows for the installation of photovoltaic panels on roofs, because they also increase urban resilience.”

Resilience is a relatively new concept, the essence of which is the perception of the city as a system of connected vessels, in which each of the urban components affects the others and ultimately the city's crisis resilience.

According to the Law of 27 March 2003 on spatial planning and development, the studies of conditions and directions of spatial development and other strategic documents contain a number of provisions relating to resilience and suggesting the development of urban resilience.

Dr. Rogatka said: “The most important conclusion from our analyses is the fact that resilience is basically included in planning and strategic documents, the problem starts when we start to implement the provisions of these documents in practice. There is reinterpretation, overinterpretation of the provisions, and the pressure of various groups: residents, officials and developers.

"Therefore, in local spatial development plans, part of the land should be reserved for residential buildings, part for biologically active areas, and part for production and services

“The most important thing for the functioning of urban centres is the correlation of physical and social space, because there is no city without people.”

According to the researchers, “another very big problem in Polish space is the fencing of housing estates, we are dealing with significant ghettoisation (creating enclaves of buildings for a specific social group), which also has a negative impact on the functioning and aesthetics of the space of Polish cities, because, among other things, it divides people into those +from the housing estate+ and +outsiders+ and creates barriers in the public space.”

In Western Europe, if there is no local plan for a given area, you can't build anything there. On the other hand, in Poland, it is possible to erect buildings based on a decision on development conditions, and this, unfortunately, has a negative impact on the shape of Polish space - both in and outside cities.”

Kowalski added: “In Poland, the plan coverage was too small, which could cause construction and development paralysis, so the legislator decided to introduce decisions on development conditions. Therefore, we have a long way to conscious, responsible and forward-looking space planning.”

Their paper 'Urban resilience in spatial planning of polish cities - True or false? Transformational perspective', was published in Land Use Policy.