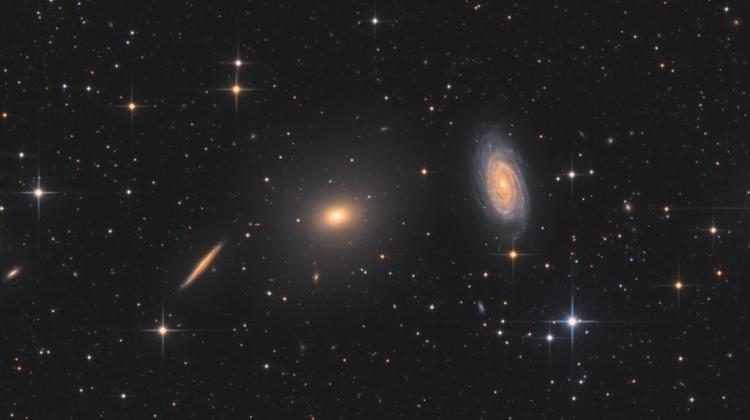 The image shows the elliptical galaxy NGC 5982 (centre) and the spiral galaxy NGC 5985 (right). It turns out that these two types of galaxies behave differently when there is excess gravity in their outer regions. Credit: Bart Delsaert (www.delsaert.com).

Scientists have taken a step forward in understanding whether dark matter actually exists in the Universe - or whether it is an exception to how we understand gravity.

A component of the Universe that is not observed directly, dark matter is thought to exist based on gravitational interactions with ordinary (luminous) matter.

But although its existence has been proposed as an explanation for the observed rotation of galaxies and the movements of galaxies in clusters, there is not enough visible matter to explain the effects properly.

Now scientists led by Margot Brouwer (University of Groningen, University of Amsterdam), and including Maciej Bilicki from the Center for Theoretical Physics of the Polish Academy of Sciences in Warsaw, have carried out an investigation by observing thousands of galaxies.

Using data from the Kilo-Degree Survey (KiDS) carried out on the VLT Survey Telescope (VST) of the European Southern Observatory (ESO), they measured the weak gravitational lensing, i.e. a slight deflection of galaxy light caused by the gravity of other galaxies closer to us.

Galaxies in the 1,000 square degree area of the sky (2.5 percent of the celestial sphere) were selected for analysis, examining the gravity distribution for approximately one million galaxies. Data on the analysed galaxies came from a catalogue published independently by an international group led by Dr. Maciej Bilicki.

The researchers measured Radial Acceleration Relation (RAR) for almost 260,000 galaxies. RAR describes the relationship between the expected gravity and the gravity observed on the basis of visible matter, from which conclusions on the amount of excess gravity can be drawn.

Until now, this excess gravity has only been determined in the outer regions of galaxies by observing the movement of stars and cold gas. By using the gravitational lensing effect, researchers were now able to determine RARs in regions with 100 times weaker gravity, reaching far beyond the centres of galaxies.

They tested four different theoretical models - two assuming the existence of dark matter and two with Modified Newtonian Dynamics (MOND). It turned out that the simulation named MICE (one of the dark matter ones) fit the results best, but the other variants also remained in play.

Further in the study, galaxies were divided into young (blue spiral galaxies) and old (red elliptical galaxies). They form differently, and the relative amount of ordinary and dark matter in different types of galaxies can vary. In turn, according to alternative theories of gravity, this ratio should be constant. This gave a chance for further verification of individual models.

Bilicki said: “In modified theories of gravity such as MOND, this ratio should always be the same regardless of galaxy type, as the only significant parameter (determining RAR) in these models is the total mass of all ordinary (luminous) matter, that is, stars and gas.

“Meanwhile, in the standard cosmological model, red galaxies have relatively more dark matter than blue ones, with the same total mass of ordinary matter, that is, the ratio of dark matter to luminous matter is greater for red galaxies than for blue ones.

“Our research shows that the RAR ratio is different for red galaxies than for blue ones. This would explain the differences in the measured RAR ratios and rule out theories such as MOND or entropic gravity.”

He added, however, that further observations are needed as it is also possible that red galaxies actually have much more ordinary matter than we think if they are surrounded by huge clouds of rare hot gas (unlike blue galaxies, which would have much less of that gas).

This variant would not rule out at least some alternative theories of gravity.

The article describing the research results was published in the journal Astronomy & Astrophysics.