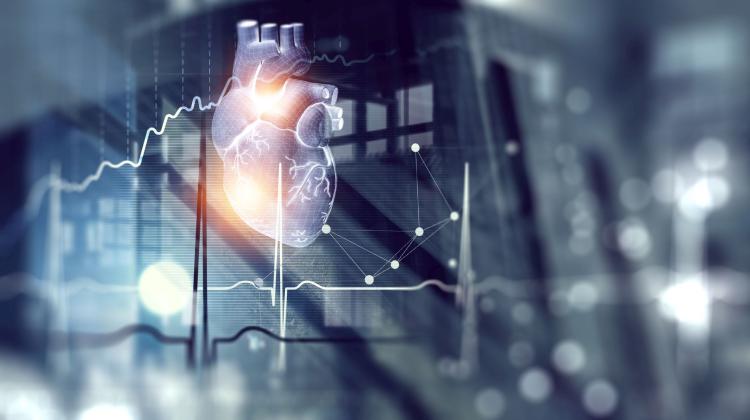 A computer system that allows for a quick analysis of the patient's medical history and determines the risk of serious heart disease, such as atrial fibrillation or ischaemic heart disease has been developed by Polish scientists from the Medical University of Łódź.

The system called Health Discoverer Platform and is already successfully used in the Central Teaching Hospital of the Medical University of Łódź,  uses artificial intelligence, including neural networks and algorithms, to create models that predict and classify which patients are most at risk.

Data from the Central Statistical Office data show that cardiovascular diseases are the cause of nearly half of all deaths in Poland.

Dr. Krzysztof Kaczmarek from the Department of Interventional Cardiology and Electrocardiology at the Medical University of Łódź said: “Up to 23 percent of Poles over 65 suffer from atrial fibrillation, and one in four men and one in five women over 40 will suffer from heart failure. Hypertension occurs in 29-45 percent of the adult population, while ischaemic heart disease affects 1.6 million people in Poland.”

Until now, a great challenge for cardiologists has been the inability to effectively analyse patient documentation to be able to detect people at high risk of heart disease as early as possible.

Dr. Kaczmarek said: “A team of scientists worked for almost two years to create a computer system that would allow for a rapid analysis of the patient's medical history and determine the risk of these diseases.”

The algorithms used by the platform ensure the effectiveness of prediction at the level of 80-85 percent, which is a powerful support for the patient's physician.

At the Central Clinical Hospital of the Medical University of Łódź, the Health Discoverer Platform, connected to the hospital's central system, automatically analyses the medical documentation and the results of interviews of each admitted patient (regardless of the symptoms, with which they were admitted). If the analysis result confirms that a given patient is at high risk of worsening of the analysed heart diseases, the system immediately alerts the medical staff.

Professor Paweł Ptaszyński, medical and organizational director of the Central Teaching Hospital of the Medical University of Łódź said: “At this point, the attending physician orders additional tests to check the condition of the heart and the patient is immediately transferred to the electrocardiology department.

“This pathway increases the patient's chances of recovery and thus reduces the risk that after some time the patient will return to the hospital with much more serious health problems caused by a cardiological condition diagnosed too late. It is an extremely useful and solution with potential for development.”

The Health Discoverer Platform also searches for patients with a similar course of the disease, so that the doctor can immediately compare the therapies used to choose the best solution, tailored to the needs of a specific person. Patients can also log in to the platform and view their medical records in one place and receive alerts if they are at risk of developing one of the analysed diseases.

According to the creators of the system, the solution implemented in the hospital in Łódź can be easily implemented in other centres, also in the form of a nationwide network connecting all facilities.

Dr. Bartłomiej Grobelski from the special purpose company of the Medical University of Łódź, which has been involved in the project from the very beginning said: “You only need to connect data from other centres to the platform, the system does not have to be permanently integrated. Periodic data synchronization between the hospital's computer system and ours will be sufficient. With more data, the algorithm will allow for even faster detection of patients with a specific disease profile.”

The system also makes it easier for doctors to select groups of patients who can be offered innovative methods of treating cardiac diseases. Existing hospital systems do not have tools that would enable finding such people based on the content of their medical records. If a team of doctors performs a new treatment procedure, they must then report on which patients they selected, what their condition was, etc., and verifying new procedures usually takes several months.

The Health Discoverer Platform offers the possibility of selecting patients faster and automatic generation of reports on a specific subset of patients.

According to Dr. Grobelski, Health Discoverer Platform is an excellent example of hospital implementation of an innovation created at a medical university.

The special purpose vehicle of the Medical University of Łódź belongs to the Alliance of Special Purpose Companies, an organization associating over 20 companies of universities and research institutes from all over the country. From the beginning of their operation, they have completed nearly 2,000 projects for companies and public institutions.