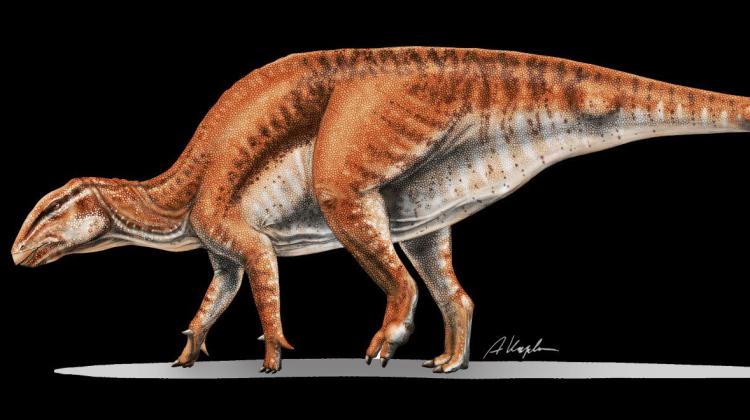 Dinosaurs in the latter years of their lives suffered from a form of arthritis, scientists have found.

By examining the remains of the late Cretaceous herbivorous dinosaur Gobihadros mongoliensis, researchers at the University of Silesia and the

Polish Academy of Science’s Institute of Paleobiology discovered that the animal suffered from calcium pyrophosphate crystals deposited in the joints which caused joint stiffness.

PhD student Justyna Słowiak from the Institute said: “This is the first time that CPPD (a disease caused by calcium pyrophosphate crystals) has been found in dinosaurs.

CPPD is a form of arthritis that causes pain, stiffness, tenderness, redness, warmth and swelling (inflammation) in some joints.

To date, the physiology of ageing and growth of dinosaurs has only been studied to a small extent.

Dr. Tomasz Szczygielski from the Institute of Paleobiology said: “Dinosaurs in the reptile family tree are close to birds, but some of their characteristics, such as metabolism, refer to mammals.

“That is why it is still difficult for us to interpret how these organisms aged.

“We know dinosaurs died out 66 million years ago, but we don't know why crocodiles and turtles survived.

“The more we know about physiology, the closer we are to interpreting why some organisms survived and others went extinct.”

The research now opens up the space for further interpretations regarding the body's fight against a specific disease.

The scientists say that in the future it will be possible to design machines that imitate the behaviour of the body fighting the disease.

The study 'Osteopathology in the fossil record as a carrier of palaeoecological and palaeoepidemiological information', was published in Scientific Reports(https://www.nature.com/articles/s41598-021-91366-1).

The dinosaur remains with visible traces of CPPD can be viewed at the recently opened exhibition 'How dinosaurs aged' at the Museum of Evolution at the Palace of Culture and Science in Warsaw. (PAP)