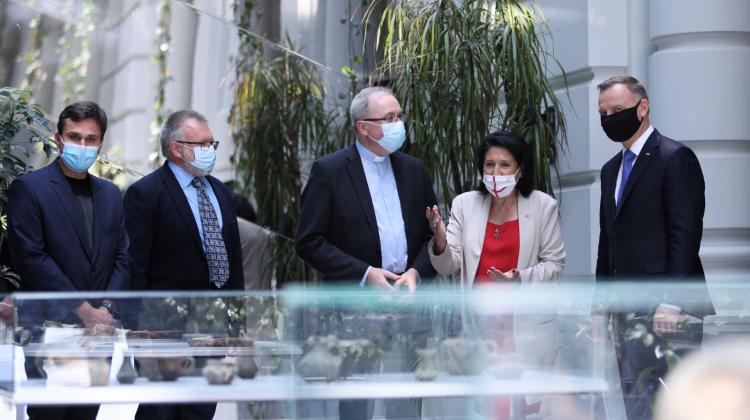 Director of the Krukowski Centre, head of the Polish-Georgian Gonio-Apsaros expedition Radosław Karasiewicz-Szczypiorski (2L), Chancellor of the Krukowski Centre research station Jacek Hamburg (L) and President of the UKSW Development Foundation, Fr. Zenon Hanas (3L) during a meeting with President of the Republic of Poland Andrzej Duda (R) and President of Georgia Salome Zurabishvili (2R) in Tbilisi on January 27th, organized as part of the official visit of the Polish presidential couple to Georgia. (amb)

A Georgian-Polish archaeological expedition has discovered an ancient settlement in the Georgian city of Kutaisi, the origins of which date back to the 13th-12th century BCE, around the times of the mythical Argonauts' expedition to find the Golden Fleece.

The discoveries change the perception of Georgia's history as it was previously believed that the settlement was several hundred years younger.

Director of the Krukowski Polish-Georgian Interdisciplinary Research Centre, Professor Radosław Karasiewicz-Szczypiorski, said: “Until now, a certain chronology was established using traditional methods, and certain dates for the beginning of the Georgian state in the territories of western Georgia were indicated. The findings made with new methods by researchers in the interdisciplinary team indicate that the history of the city of Kutaisi is several hundred years longer and that these mythical contacts did take place and were earlier than previously thought.”

Chancellor of the Interdisciplinary Research Centre, Jacek Hamburg, said the researchers had found the fortification system of an ancient settlement, which was initially dated to the 8th-7th century BC, but expert analyses - such as radiocarbon dating - indicate that it comes from the 13th-12th century BCE.

He said: “We are revising the dating of the entire site, moving the entire city of Kutaisi down into the Bronze Age, and we know this city is even more ancient than we originally thought.

“This system of fortifications includes a 10 meter-wide and 6 meter-deep moat. We also found a collapsed wooden watchtower or an observation tower, indicating that there was also a line of wooden fortifications with towers and a palisade behind the moat line. It was probably the largest city in the area.”

He added: “We found stone casting moulds for making axes with an asymmetric blade, very typical for the Colchian culture and the Bronze Age, and the later Antiquity. We also found fragments of furnaces. They had all been dumped in the moat. When such a mould was damaged after several object castings and it was no longer usable, a moat was the natural place for dumping this type of rubbish. What was rubbish for them, for us is a great archaeological monument that allows us to reconstruct their history.

“The ecofacts - that is, the organic material - have also been preserved very well. There were anaerobic conditions in the moat. The access of oxygen was so limited that the wood, grape seeds and fig seeds were perfectly preserved.”

Hamburg continued that as there was a grain of truth in every myth, this could also be the case with the myth about the Argonauts' quest to find the Golden Fleece. He said: “Perhaps there will be a confirmation of this in the future. This requires further research.”

Fr. Zenon Hanas, President of the Cardinal Stefan Wyszyński University Development Foundation, said that his institution's task was to support Polish scientists in their research. He said: “Together with the Polish National Foundation, we managed to established an archaeological station in Kutaisi. Our task is to create a professional research infrastructure where these projects will be carried out in contact with our Georgian partners.

'The thought that accompanies us when creating this station is that other scientists should also come here: ethnologists, historians, musicologists, and conduct research together. It is a base that is extremely important for Polish researchers. I think it will also open up prospects for the future of joint Polish-Georgian research projects.”

Hamburg added that Georgia is a very interesting area for research, not yet well explored by archaeologists. He said that large-scale archaeological research had been conducted in this area only for about 10 years. 'Learning the history of Georgia and the Caucasus introduces a completely new perspective', he said.