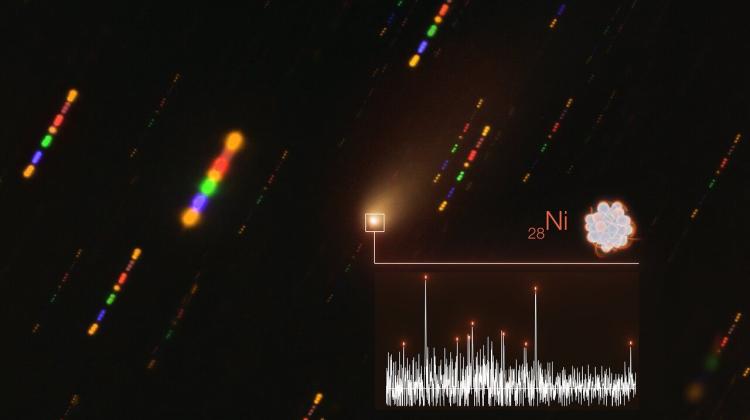 The image illustrates the detection of nickel in the atmosphere of the interstellar comet 2I/Borisov. The spectrum of the comet's light (bottom right) is superimposed on a real image of the comet taken with the VLT in late 2019. Orange dashes represent the nickel lines. Credit: ESO/L. Calçada/O. Hainaut, P. Guzik and M. Drahus.

Astronomers have detected gaseous iron and nickel in comet atmospheres, including one comet from outside our planetary system. Among the discoverers are two scientists from the Jagiellonian University. The results are reported by Nature and the European Southern Observatory (ESO).

Polish scientists examined the interstellar comet 2I/Borisov, and the Belgian team analysed the comets in the Solar System. They published their work independently in two papers in the prestigious journal Nature.

2I/Borisov is a unique comet because it came from outside the Solar System. It is the second observed 'foreign' object after 'Oumuamua. At the end of January 2020, Piotr Guzik and Michał Drahus from the Astronomical Observatory of the Jagiellonian University in Kraków conducted observations of 2I/Borisov with the VLT telescope of the European Southern Observatory (ESO). At the time, the comet was about 300 million kilometres from the Sun, approx. twice the Earth-Sun distance.

Despite the large distance, it was possible to detect the presence of nickel in the gas formed in the comet's atmosphere. This is very surprising, because so far gases with heavy metal atoms have been observed only in hot environments, for example in the atmospheres of ultra-hot exoplanets, or in comets passing very close to the Sun.

Piotr Guzik, a PhD student at the Jagiellonian University said: “What distinguishes 2I/Borisov is the low temperature of the shell due to the great distance from the Sun. This means that nickel is released in a different way than by evaporation of metal-rich dust and rock crumbs.

“At first it was unbelievable that nickel atoms could actually be present in 2I/Borisov, far from the Sun. It took a lot of testing and checking before we could finally convince ourselves.”

The surprising discovery of nickel in the comet's gaseous shell turned out to be an additional common feature with native comets. An article by a Belgian group of scientists was published in Nature, also on comets and similar studies. A team led by Jean Manfroid from the University of Liège (Belgium) found iron and nickel in the atmospheres of all (around twenty) comets observed over the past 20 years, including one very far from the Sun.

The scientists observed comets with the UVES spectrograph on the VLT. Now they have been able to identify faint, previously unknown lines in the spectra of these comets and attribute them to nickel and iron. According to researchers' estimates, every 100 kilograms of water in the atmospheres of these comets contains only 1 gram of iron and a similar amount of nickel.

Scientists from the Belgian team hope their research will pave the way for future discoveries.

Emmanuel Jehin from the University of Liège said: “Now people will search for those lines in archived data from other telescopes. I think this will also trigger new work on this subject.”