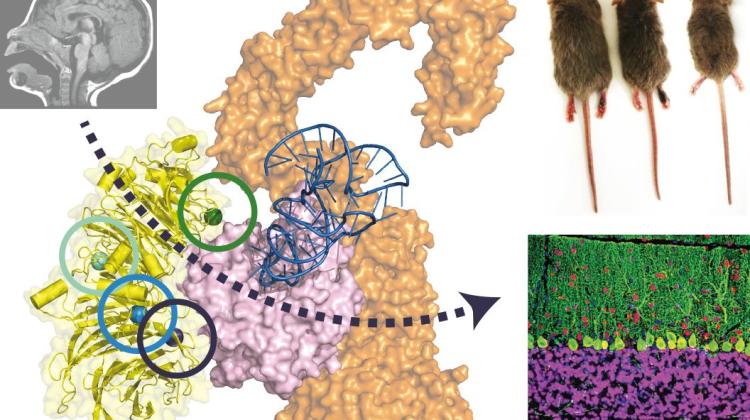 The structure of the first three subunits of the Elongator complex with marked mutations within the Elp2 subunit (yellow) that disrupt neurological processes; on the left, an MRI scan of patient's normal brain; on the right, pictures of mice with tested mutations in Elp2 and the result of immunostaining of parts of their brain that indicate neurogenesis defects. Credit: Dr. Sebastian Glatt

Therapies for neurological disorders can be found in mutations in one of the protein complexes of the human body, say researchers.

Scientists from the Max Planck Research Group from the Malopolska Centre of Biotechnology (MCB) at Jagiellonian University and the University of Queensland in Brisbane, Australia found that mutations were responsible for the molecular and genetic causes of intellectual disability and autism, as well as the fundamental role of the Elongator complex (one of the protein complexes) in the human body.

Tomasz Gawda, an MA student at Max Planck Research Group and a second author of the publication in Nature Communications said: ’Elongator is a multi-subunit protein complex that introduces chemical modifications to tRNA molecules playing a central role in translation – a process that regulates the production of all proteins in every living organism.”

Colleague Monika Gaik addd: “We know that mutations in any of the Elongator subunits are associated with a variety of human diseases, but the underlying mechanisms have not been understood until now.”

Through a multidisciplinary approach, scientists were able to combine clinical data from patients in Australia, Denmark, Germany, the United States and France with in vivo experiments on murine disease models, including detailed brain scans and behavioural tests.

In addition to biomedical data, the seven Polish scientists performed an advanced biochemical analysis of the purified human Elongator complex, demonstrating the direct effects of mutations identified in patients with neurological disorders on the molecular level.

The published results show that mutations in the second subunit of the Elongator complex (Elp2) occurring in patients inhibit the enzymatic activity of the entire complex and have a direct impact on the development of the human brain.

Co-author Dr. Sebastian Glatt and head of the research group at MCB said: “It is the first time that we are able to purify this large human protein complex and directly study the detrimental effects caused by mutations in the lab. Our biochemical and biophysical analyses of the mutations found in ID and ASD directly confirmed that the protein is responsible for the observed clinical phenotypes.”

Dr. Glatt initiated the research project with Professor Brandon J. Wainwright from the Institute for Molecular Bioscience in Brisbane.