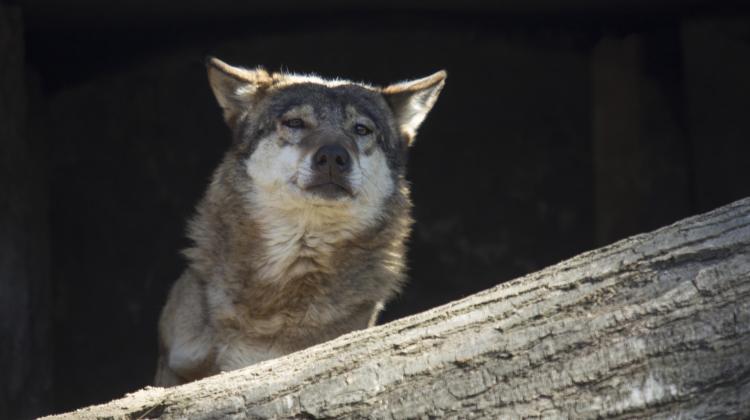 Wrocław, April 16, 2019. A wolf in the enclosure of the modern grey wolf habitat 'Wilcza Ostoja' in the Wrocław Zoo (sko) PAP/Aleksander Koźmiński

More than a decade ago, experts recommended planning wolf conservation within cross-border subpopulations. Now the research of an international team led by Polish specialists has shown that this approach is also justified by the genetic structure of this predator's population.

Wolves now live in most European countries thanks to the restriction or complete ban on hunting them. In order to effectively manage the protection of the species, it was necessary to designate cross-border management units, also known as subpopulations. Thanks to them, it was possible to plan measures for the protection of wolves within clearly defined biological units, and not within the borders of individual countries. The proposed subpopulation range, based mainly on geographic, economic and demographic criteria, was developed by specialists from the Large Carnivore Initiative for Europe IUCN, a Specialist Group of the IUCN's Species Survival Commission.

An important contribution to determining the ranges of the wolf subpopulation was genetic research published in 2019 in the journal "Scientific Reports". Scientists from the Faculty of Biology of the University of Warsaw, in cooperation with specialists from the Czech Republic, Slovakia and Lithuania, using a fragment of mitochondrial DNA and thirteen microsatellite sequences of nuclear DNA of several hundred wolves, confirmed then the distinctiveness of the Carpathian wolf subpopulation and the clear difference between wolves from the Baltic and Central European subpopulations.

In a paper published in May in Wildlife Biology, an international team of researchers led by specialists from the University of Gdańsk and the University of Warsaw presented arguments for the distinction between the Baltic and Central European wolf subpopulations. Scientists from Austria, Belgium, Belarus, Czech Republic, Denmark, the Netherlands, Lithuania, Luxembourg, Germany, Slovenia and Poland, who contributed to the analysis, pointed to significant genetic differences between the two subpopulations.

First author of the study, Dr. Maciej Szewczyk from the Department of Vertebrate Ecology and Zoology, Faculty of Biology, University of Gdańsk said: “The different frequency of alleles (versions of genetic sequences) in the Baltic and Central European subpopulations allows for the indisputable distiction between the two groups.

“It also indicates the demographic independence of both subpopulations, which means a relatively low level of cross-breeding between them.”

The Central European wolf population extends to the west of the continent. Currently, it mainly covers western Poland as well as eastern and northern Germany, but individual family groups of these predators have already been recorded in the lowland part of Czechia, Denmark, the Netherlands and Belgium, and individual animals have reached Luxembourg. Research shows that the genetic distinctiveness of wolves from the Central European population is related to the strong founder effect. The wolves that first reached the re-colonized areas left the most descendants, and thus - their genes.

The study’s co-author, Dr. Robert Mysłajek from the Department of Ecology, Institute of Functional Biology and Ecology, Faculty of Biology, University of Warsaw, said: “The founder effect significantly influenced the genetic distinctiveness of the local population. We saw a similar phenomenon earlier in the Alps, where wolves from the Apennine Peninsula settled. Currently, the two subpopulations are treated as two independent units.”

Dr. Sabina Nowak, president of the Association for Nature 'Wolf' and a member of the Large Carnivore Initiative for Europe IUCN, said: “An example is the International Union for Conservation of Nature (IUCN) Red List of Threatened Species, in which the threat levels are determined for individual subpopulations. The Central European wolf subpopulation is now listed as Vulnerable.”

The research project was co-financed by the National Science Centre. (PAP)