Researchers solve one of the mysteries of photosynthesis 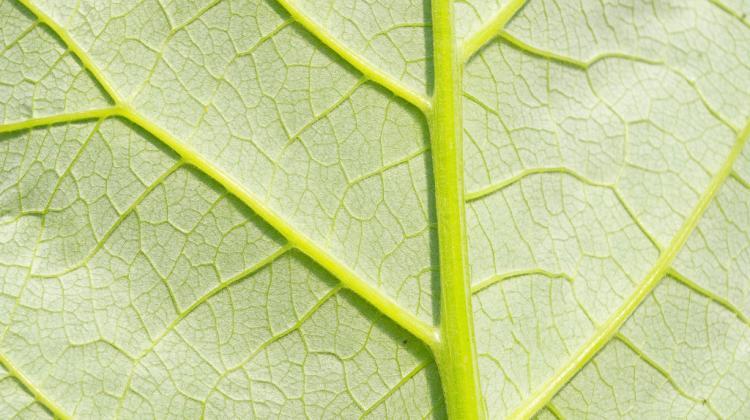 An international team of scientists has discovered how a certain enzyme helps to create photosynthetic membranes and green pigments for leaves that don’t have access to light.

The life of almost all organisms on Earth depends or indirectly or directly on photosynthesis, the process which produces organic compounds that constitute our food, and the oxygen that we breathe. Chlorophyll molecules play a key role in the photosynthesis process as not only does it give leaves their green colour, but above all absorbs sunlight, whose energy drives the entire photosynthesis process.

The Foundation for Polish Science said: “Chlorophyll biosynthesis is a complicated process, in which a dozen or so enzymes gradually transform a small, water-soluble substrate into increasingly hydrophobic compounds with better light absorption capacities.

Research carried out since the 1950s indicates that the enzyme LPOR (light-dependent protochlorophyllide oxidoreductase) is involved in all of these processes. It was known that in the dark, LPOR forms large complexes with one of the chlorophyll precursors, and after exposing these complexes to light, the enzyme carries out a catalytic reaction by modifying the bound dye to a molecule resembling finished chlorophyll. The formation mechanism of these complexes, their structure or mechanism of light-dependent reaction were not known.

The research team which includes Dr. Michał Gabruk from the Faculty of Biochemistry, Biophysics and Biotechnology of the Jagiellonian University said: “Using the LPOR enzyme produced by genetically modified bacteria, a chlorophyll precursor purified from wheat seedlings, as well as a special mixture of lipids, salts and other compounds the enzyme needs, we managed to find the conditions, in which LPOR creates very similar complexes to those found in plants.

“In cooperation with scientists from the University of California in San Francisco and using cryo-electron microscopy, we obtained thousands of images of these complexes, allowing us to reproduce the 3D structure of the entire system with near-atomic resolution.”

It turned out that while binding its substrates, including a dye that is a chlorophyll precursor, LPOR attaches to the lipid membrane, and in it directly interacts with one of the lipids. This causes a change in the shape of the enzyme that initiates oligomerization (multiple enzyme molecules forming a larger complex).

According to the researchers, oligomerization is not random as individual enzyme molecules first combine into long threads, which then coil together in a larger fibre. Since each of the enzyme molecules binds lipids, the lipid membrane is pulled into the fibre and firmly entwined by the enzyme molecules, which simultaneously press the chlorophyll precursor in the membrane.

The Foundation for Polish Science, of which Dr. Gabruk is a beneficiary of its START programme said: “The whole process is very fast and efficient, and only occurs in the dark. A flash of light is enough for the enzyme molecules within the fibres to carry out a catalytic reaction, which leads to the breakdown of the entire complex in a few minutes: the lipids trapped inside are released along with the chlorophyll precursor pressed into the membrane, which is the first stage of formation of photosynthetic membranes.

“Thanks to obtaining the structure of the entire active complex with near-atomic resolution, we know how the dye is bound by the enzyme. This will allow us to understand the mechanism of light-dependent reaction.”

The entire process of formation of LPOR fibres and their accumulation in large quantities is particularly intensified in young seedlings of plants hidden somewhere on the ground, in the buds of trees and the insides of cabbage, wherever the leaves do not have access to light. When seeing such pale yellow plant tissues, we can be sure that LPOR fibres are breaking down in them, helping to create photosynthetic membranes and chlorophyll.