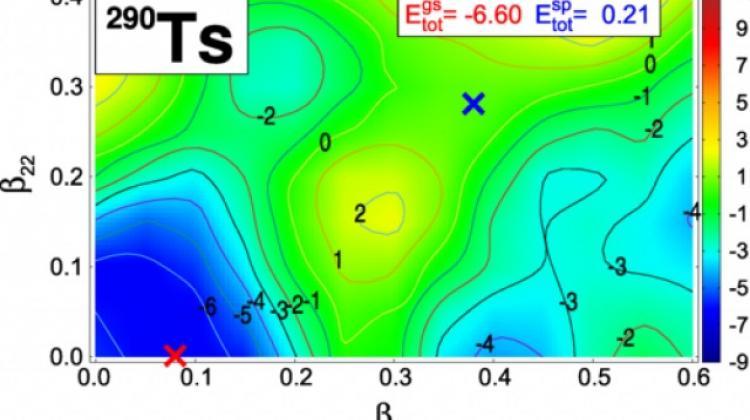 A new study shows that the probability of synthesizing a new nucleus does not decrease as rapidly as previously assumed with the increase in excitation energy.

According to the National Centre for Nuclear Research which carried out the work with the help of Polish scientists: “Calculations show that the scenarios in which a new nucleus would be created after the emission of 6, 7, or even more neutrons, should be taken into account by experimenters."

The heaviest nuclei are formed as a result of the collision and fusion of the nuclei of the lighter elements. In laboratories, one of these nuclei, usually clearly lighter, is a projectile that hits the heavier nucleus that acts as a target.

After the collision, a complex excited system is created, in which repulsive electromagnetic forces and opposing strong forces compete with each other.

“There is a chance that when the excess energy is released, the remaining nucleus will be stable, or at least live long enough to be observed and some of its physical properties determined.

“The heaviest nuclei produced in laboratories live only for unimaginably small fractions of a second, but this is enough long for physicists to study them.”

Until now, when planning to synthesize selected nuclei, it was believed that after the collision the level of this excess energy should be as low as possible and the system should be able to get rid of it by emitting only single neutrons or alpha particles. The assumption was that the likelihood of producing a new, relatively stable system decreased rapidly with an increase of the amount of energy to be removed and the number of particles the system would have to emit for this purpose.

The results of the five theoretician physicists from South Korea, Russia and Poland show that the probability of fusion of a new nucleus does not decrease as rapidly with the excitation energy increase as previously assumed.

The Centre said: “The calculations show that the scenarios, in which the expected nucleus would be formed after the emission of 6, 7, or even more neutrons, are still worth considering and should be taken into account by experimenters, for example in the lab at the Joint Institute for Nuclear Research in Dubna in Russia, one of the few +factories+ of super-heavy elements in the world.”

Co-author of thew report, Professor Michał Kowal at the National Centre for Nuclear Research and head of the Department of Theoretical Physics said: “The interplay of two effects has a decisive impact on our results. On the one hand, we have a sufficiently high probability of a highly excited system. On the other hand, the neutron emission threshold and the fission barrier which protects the newly formed nucleus from decaying advantageously compete with each other.

According to the scientist, this offers a new opportunity for the synthesis of neutron-deficient nuclei and in the future it could help to link the hot fusion scenario with nuclei produced in cold fusion.

Co-author Dr. Piotr Jachimowicz from the University of Zielona Góra said: “The calculations we made were possible thanks to our new estimates of the energy thresholds for neutron emission and fission. These results were recently published in composite tables used by the entire nuclear physics community.”

The National Centre for Nuclear Research added: “The study also found a fascinating effect related to the possibility of the emission of one or two alpha particles at the very beginning of the de-excitation process. This new decay channel and new production mechanism could open a new way for future, currently unknown syntheses.”

The researchers emphasize that these are still extremely low probabilities, some of the lowest we know in nature, but still achievable thanks to newly developed devices such as the super-heavy element factory at the Joint Institute for Nuclear Research in Dubna.