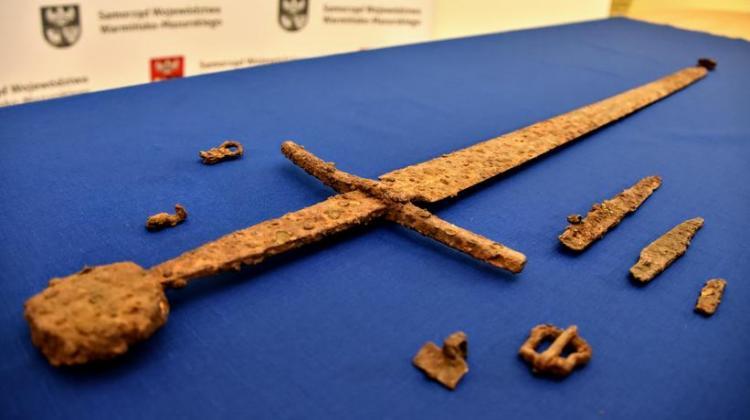 A history enthusiast and detectorist has made a ‘once in a decade’ discovery after finding a sword thought to have come from the Battle of Grunwald.

Aleksander Miedwiediew had been carrying out reach near the city of Olsztyn when he came across the extraordinary find, which included the sword’s scabbard and a knight’s belt with two knives attached.

He said: “This is a phenomenal set in the form of a sword, a scabbard, a belt and two knives. Considering that these objects come from the turn of the 15th century, so they spent around 600 years in the ground, they are preserved in extremely good condition.”

Director of the Museum of the Grunwald Battlefield Szymon Drej said that preparations are now underway to carry out archaeological work in the area.

He said: “It is puzzling that no one took these objects, very valuable at the time. Perhaps it will be possible to find the remains of the knight, who owned them.

“The set of weapons will now be subjected to conservation process and research work. We have some suspicions as to the social status of the medieval owner of the sword and we are curious to find out what the layer of rust hides.”

Detectorist Miedwiediew already has a record of sensational finds. In 2020, he found two perfectly preserved combat axes during archaeological work in the fields of Grunwald in early autumn. (PAP)