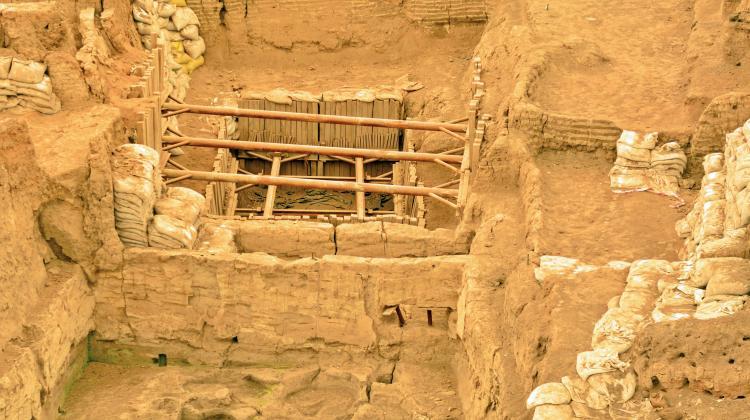 Children and adults buried next to each other in one of the oldest cities in the world were not related, an international team of scientists has found.

Çatalhöyük, an archaeological site in central Turkey, was inhabited continuously for nearly 1,200 years between 7100 and 5950 BC. It is estimated that during the period of its greatest prosperity, the densely built-up settlement with an area of ​​several dozen hectares was inhabited by approx. 6,000 residents.

The dead were buried under the floors of their households leading archaeologists to wonder whether they were related.

The international team of researchers, including scientists from the Adam Mickiewicz University in Poznań, examined 22 genomes obtained from the deceased buried in prehistoric cities in Anatolia: Aşıklı Höyük and Çatalhöyük.

According to the researchers, in some prehistoric cities, houses served as burial places for members of relatives groups, while in other sites, including Çatalhöyük, adults and children buried under one house  were not related to each other. The conclusions were published in the journal Current Biology.

The archaeologists said that the people living in the Middle East in the Neolithic were the first settled agricultural communities that not only built permanent houses, but also, during their use, buried their dead under them.

The researchers said: “This custom has been known for a long time, but the way it was related to the social organization of the residents of these settlements was a matter of guesswork. Some researchers assumed that the buried persons were members of biological families, while others considered more complex structures, not based on genetics.”

To resolve the issue, the team analysed dozens of burials from several Neolithic settlements. One of the leading researchers was Dr. Maciej Chyleński from the Institute of Human Biology and Evolution at the Faculty of Biology, Adam Mickiewicz University in Poznań. In 2019, based on mitochondrial genomes, he demonstrated the lack of maternal lineage between people buried under the floors of houses in Çatalhöyük.

The researchers said: “In the continuation of the project, it was important to extend the research to other sites from the region, but most of all to use nuclear DNA, which enables research in much higher resolution, even despite the poor preservation of genetic material in the tested samples. We analysed more than 60 samples from two sites, Aşıklı Höyük and Çatalhöyük, but genetic material of adequate quality could be obtained only for 22 samples, most likely due to unfavourable environmental conditions.”

The researchers compared these data with several dozen previously published genomes obtained from the deceased at three other Anatolian sites: Boncuklu Höyük, Barcın and Tepecik-Çiftlik, and then used them to estimate the degree of kinship between people buried within or in the vicinity of individual buildings.

They found that in the older (approximately 10,000 year old) settlements Boncuklu Höyük and Aşıklı Höyük, the dead were relatively often buried near their biological relatives: siblings, parents or children. But there were exceptions to this rule.

According to the researchers, more intriguing results have been obtained for the later settlements Çatalhöyük and Barcın (approx. 8,500 years old). During that period, human settlements significantly increased and stabilized. In these two settlements, researchers managed to obtain DNA mainly from the burials of children and infants.

The researchers said: “It turned out that in buildings with several such burials, biological relationships between the buried children were relatively rare.”

The data confirm the conclusions drawn earlier by Dr. Chyleński on the basis of mitochondrial genomes that there is no evidence that these people belonged to biological families. The researchers conclude that the social structure in Çatalhöyük, and possibly other settlements from that period, was not based on genetic relatedness.

The publication’s co-author Professor Arkadiusz Marciniak said: “We are still far from fully understanding the early Neolithic communities, but their organization was certainly significantly different from the structure based on biological kinship or patriarchal kinship relations. The basis of social organization was probably a complex system of socially regulated dependencies and connections linking individuals and groups of people living in individual households.”