Researchers discover one of the causes of leukodystrophy - a brain disease 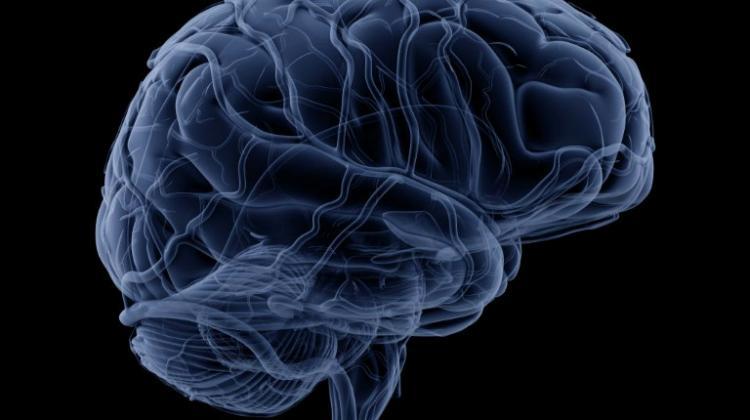 One of the causes of leukodystrophy - a genetic disease of the white matter of the brain - has been identified by researchers from the universities in Wrocław, Göttingen, Jena and Cologne.

Leukodystrophies are a group of genetically determined diseases of the white matter of the brain, in which disorders of myelin sheath production on the projections of neurons occur. They lead to cognitive disorders, impaired motor and vegetative functions.

The researchers found that in heterozygous people, in whom the amino acid valine (V) at position 115 changed to methionine (M) in the FBP2 gene, a rapid development of leukodystrophy (neuronal demyelination) is observed. These changes occur in babies one year old and subside with age. After reaching maturity, people suffering from such leukodystrophy exhibit only minor mental and motor disorders. It is not yet known whether this mutation leaves a mark on the health of patients in their twenties and older. Interestingly, adults carrying the FBP2 V115M mutation are characterized by overproduction of the mutated form and even higher overproduction of the native, unmutated form.

FBP2 is a multifunctional protein which, in addition to the regulation of glucostasis (sugar management in the body), is responsible for the proper functioning of mitochondria and the course of the cell cycle. Research carried out at the Department of Physiology and Molecular Neurobiology of the University of Wrocław has shown that mutated FBP2 (V115M) has altered kinetic properties and thermodynamic stability, which is the cause of disorders in the functioning of mitochondria and - probably - the cell cycle.

FBP2 is a homotetramer, a protein composed of four identical subunits. It turns out that the V115M mutation causes the mutated FBP2 to form abnormal tetrameric combinations with the native, normal FBP2 molecules. It therefore seems that the very high overexpression of native FBP2 in adulthood is a mechanism that allows cells to produce a fully functional protein - native FBP2 tetramer, and this in turn enables the proper functioning of cells.

At the same time, however, tetramers are also produced that include subunits of both native and mutated FBP2, we read in the press release from the University of Wrocław. Such tetramers have reduced thermodynamic stability and, as biologically non-functional, they undergo the process of degradation. The existence of a large fraction of abnormal FBP2 tetramers is reflected in the very high activity of protein degradation processes, especially those responsible for lysosomes. It is unclear whether such high activity of lysosomal systems (an increase in the number of lysosomes by 300%) has consequences in the later stages of life of people carrying the V115M mutation in the FBP2 gene.

“We are still not able to causally treat any leukodystrophies, although in some specific cases symptomatic treatment allows patients to function relatively well,” says co-author of the study, Dr. Przemysław Duda from the University of Wrocław. But the discovery of a new cause of a disease always increases the possibility of future therapeutic strategies.

He adds that leukodystrophies are genetic diseases “and in the COVID era, gene therapy is no longer fiction. We have started to use it in clinical practice on a large scale, as exemplified by RNA vaccines. It is possible that someday we will be able to treat a large proportion of genetic diseases similarly, although this is still a rather distant future.

“At this stage, it is more important to check how many types of leukodystrophy (and possibly other diseases, such as mitochondrial abnormalities) may be caused by this mutation in FBP2 (V115M). Perhaps it affects some leukodystrophies, and perhaps other diseases, in the case of which we think that the original causes are known. Meanwhile, the actual cause may be this mutation, which has not been checked,” explains another of the authors, Professor Dariusz Rakus from the University of Wrocław.

When it comes to causes (mutations in specific genes), leukodystrophies are a heterogeneous group of diseases. The exact number of patients with leukodystrophy is not known, and the data from different countries are inconsistent, also because some people are not diagnosed despite their symptoms.

The results of the research has been published in the journal Brain Communications.