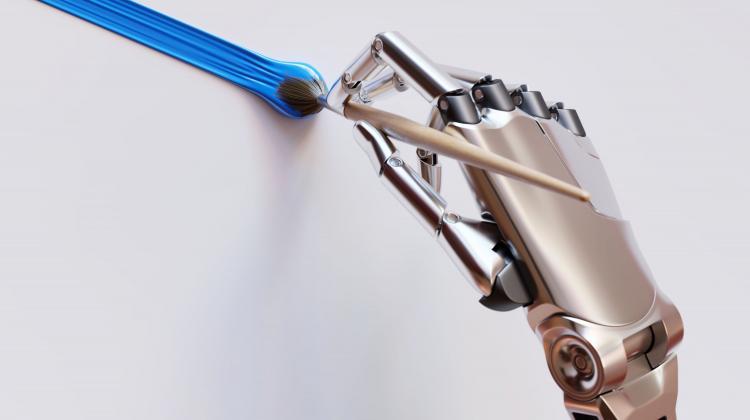 Paintings created by artificial intelligence are considered less valuable than those done by the human hand, new research shows.

Specialists from the Catholic University of Lublin and the University of Lodz divided volunteers into four groups and showed them the same image made by Ai-Da, an AI system hidden inside a humanoid shell resembling a woman.

Telling half the volunteers the creator was a human, while the other half were told that the painting had been made by a robot, the groups had to guess the value of the painting in Polish zlotys.

The researchers found that the volunteers believed that if a painting made by a robot was worth PLN 1,000, then a person should get more for a similar work.

Dr. Paweł Fortuna from the Department of Experimental Psychology of the Catholic University of Lublin and Dr. Artur Modliński from the Center for Artificial Intelligence and Cybercommunication Research at the Faculty of Management of the University of Lodz said: “If a person receives PLN 1,000 for a painting, an analogous work of a robot that is not an artist should be worth less.”

“It turns out that we still approach them with restrain. When people find out that a painting was painted by AI, they evaluate it as less valuable than a painting created by man.”

Until recently, this was a view shared by art experts, too. The breakthrough came when an AI-made portrait (entitled "Edmond de Belamy") was auctioned for $ 432,500.

This was quite a surprise for the art market as artificially generated works previously had not reached similar prices. This incident gave rise to questions about the perception and value of works of art created by artificial intelligence.

The first humanoid robots capable of painting human portraits using face identification and image reconstruction technologies were built in 2005. They created drawings that were strikingly similar to those made by humans. Since then, new generations of even more perfect robots have been built, and their work resembles images created by people more and more.

In 2019, researchers at the University of Leeds and Oxford created their Ai-Da fembot. Equipped with a camera that captures an image, appropriate software transforms it, and the effect is applied to the plane by an efficient robotic arm.

Drs Fortuna and Modliński said that following that praise Ai-Da received “we decided to check the opinion of people who do not deal with art on a daily basis.”