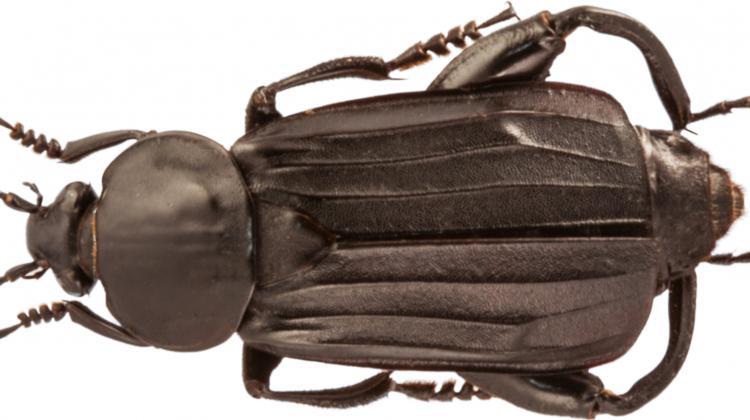 Researchers have shown that carrion beetles commonly known as shore sexton beetles care for their offspring in an unusual way (Credit: Anna Mądra-Bielewicz)

Carrion beetles from the species Necrodes littoralis, commonly known as shore sexton beetles, cover the corpse with a heat-generating coating. This provides favourable conditions for the development of their offspring, Polish scientists have shown. In the future, this research could allow forensic scientists to more accurately determine the time of death.

Entomologist and forensic scientist Dr. Szymon Matuszewski, a professor at the Adam Mickiewicz University, and Anna Mądra-Bielewicz from the Forensic Science Laboratory at the Adam Mickiewicz University discovered and explained a new way of generating heat on a corpse by necrophagic beetles commonly known as shore sexton beetles (Necrodes littoralis).

“Both adult beetles and larvae cover the corpse on which they feed with secretions and excreta. Our research has shown that this coating generates heat,” explains Dr. Matuszewski. He adds that this heat has a positive effect on the development of the beetle's larvae. The behaviour of adult beetles can be considered a form of parental care, an important component of which is thermogenesis - the production of heat beneficial for the offspring.

Publishing their research in the journal Frontiers in Zoology, the paper presents the previously unknown parental behaviour of beetles. However, the results can also be used in forensic science as they can lead to the improvement of methods for determining when the time of death.

“To determine the time of death, forensic entomologists most often estimate the age of immature insects found on the body. On this basis, they determine the minimum time since death. But to estimate the age of an insect, we need to know the temperature, in which it developed. In forensics, we usually use the temperatures from weather stations and we do not correct them to take into account the temperature change on the corpse caused by the insects themselves. Our estimates are therefore flawed in this regard, and research such as ours may contribute to the development of a method to reduce these errors,” says Dr. Matuszewski.

In order to reconstruct the thermal conditions on the corpse with greater accuracy, the conditions associated with insect-induced thermogenesis should be more precisely calculated. However, Matuszewski adds: “Such a method would be very useful, but the road to its development is still long.”

As a necrophagous beetle, the shore sexton beetle feeds on the carcasses of large vertebrates, including humans. “Adults lay their eggs in the soil near the cadaver, and the larvae feed on the soft tissues of the cadavers and their amount can be massive. In such cases, this species can break down the carcass of even a large animal to the bone,” Matuszewski continues. He adds that so far the potential of shore sexton beetles is used in forensic entomology to a little extent. The larvae of flies are more often used in forensic science.

In laboratory experiments, researchers created two types of beetle colonies. In the first case, they released adult beetles onto pieces of meat. After a few days, they removed them and added the larvae. In the second case, the meat decomposed for several days without beetles, and after a few days the larvae were placed on it. The decomposition of analogous pieces of meat without beetles was also monitored. Scientists used a thermal camera and measured the heat production on the meat. They also monitored the development of beetles. “Interestingly, when we provided the larvae with meat coated by adult beetles, heat production increased compared to control conditions, the larvae developed faster and their mortality decreased,” Matuszewski says.

He added that thermogenesis in the masses of, for example, blue bottle fly larvae feeding on corpses or wax moth larvae feeding in dead or weakened bee colonies, is a phenomenon known for a long time. Matuszewski said: “However, people have not looked for answers to the questions of how such heat is generated, what the mechanisms are and how insects contribute to its formation. We discovered a behavioural mechanism responsible for the generation of heat on the corpse by carrion beetles. Of course, this mechanism may be different in the case of blue bottle fly larvae or wax moths, but it may also turn out that all these insects use a similar behavioural strategy.”

A novelty in this study was also showing that the shore sexton beetle indirectly cares for its offspring. “Closely related burying beetles are known for their very sophisticated parental care. They bury the carcasses of small vertebrates in order to prepare them for larvae, which in some species are fed by their parents at the initial stage of larval development. The parental care with a thermal component that we have described is much simpler, but suggests that such simple forms of indirect parental care may be more common among carrion beetles.

“We plan to conduct further research. First of all, we want to identify the determinants of thermogenesis, its mechanisms and developmental effects on beetles. To this end, we plan to expand the team to include molecular biologists and physiologists. I believe that there are still many fascinating discoveries to be made in this area,” Matuszewski said.