Etna and Fagradalsfjall: Why are some volcanoes more violent than others? 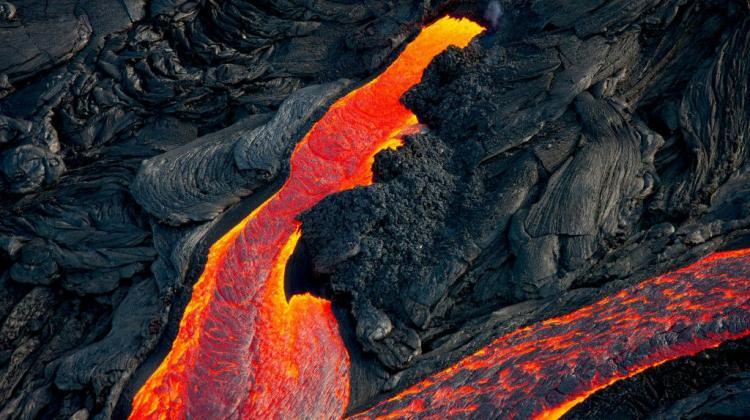 Whether a volcanic eruption is violent with high dust emissions, or quiet depends, among other things, on the composition of the melt (molten rock) which then forms the lava. It also depends on additional factors such as whether magma comes into contact with water on its way, says geologist Professor Ewa Słaby, director of the Institute of Geological Sciences of the Polish Academy of Sciences and president of the European Mineralogical Union.

Volcanic eruption in the Fagradalsfjall massif, approx. 40 km from Reykjavik in Iceland began on March 19 this year. Since then, lava has been flowing quietly from cracks in the ground. In turn, in mid-December 2020, the Mount Etna in Sicily woke up; there have already been a dozen or so eruptions, during which lava and dust clouds emerge from the crater. After each such phase of awakening, it is necessary to sweep volcanic dust from the streets and roads in the surrounding villages.

Why is the Icelandic volcano in the Fagradalsfjall massif calmer than the Sicilian Mount Etna? Professor Słaby told PAP: “In order for an eruption to occur, a volcano must have magma that is nothing other than molten rock. The melt composition determines what the eruption will look like.”

Volatile substances are melt components that play a significant role in violent eruptions. The mantle and the crust may contain minerals that contain volatile groups, for example compounds of sulphur, fluorine, chlorine, CO2, and OH groups. When the melt contains such components and has a high temperature, it is homogeneous, and these substances are built into its structure.

However, when its temperature drops, these substances are released in the form of more or less toxic gases. Their release from the melt is accompanied by a strong increase in pressure as the magma rises to the surface and in the volcano's vent it breaks into small fragments that come out of the volcano in the form of a huge cloud of dust and larger magma fragments (these products of volcanism are called pyroclastics). The height of the pyroclastic column can reach several dozen km.

Most volcanoes form at the boundaries of Earth's tectonic plates. And whether these plates push against each other or diverge is related precisely to the presence of volatile compounds, and thus the type of volcanism and the nature of eruption.

Volcanic magma usually contains more volatile substances in places where tectonic plates press against each other. This is true for the Sicilian Mount Etna. This is the reason why this volcano emits large amounts of ash and coarser fractions.

Professor Słaby said: “Meanwhile, the volcanoes, from which lava is emitted calmly, usually form in places where continental or oceanic plates are stretched and, as a result of a long process, break and separate. It should be noted that oceanic plates are thinner and more susceptible to this process. We call it the rift process.”

Under the rift zone, especially the oceanic rift, the melting Earth's mantle does not contain too much volatile substances. The rift zone runs through the entire Atlantic Ocean, including Iceland. Hawaii is another site of quiet eruptions of low-volatile magma. The genesis of those volcanoes is different, however, and not related to the rift.

For example, the recent activity of an Icelandic volcano in the Fagradalsfjall massif are crevices, during which the magma is emitted very quietly. Professor Słaby points out that there are some amounts of volatile substances in the magma, which is why residents of the surrounding areas have been advised to close their windows. But these amounts are so low that a violent eruption could not occur in this environment.

Słaby said: "In places where tectonic plates are stretched, volcanic eruptions are quiet. But they may be accompanied by additional conditions that may also make these flows dangerous.”

“This was the case, for example, in Iceland in 2010, when the Eyjafjallajokull volcano erupted and temporarily paralysed air traffic in Europe. In that case, the problem was that the volcano was covered with an ice cap. Ice was melted by the temperature of the melt (around 1000 degrees C), and the combination of water and hot magma resulted in an incredibly strong explosion. This reaction of the melt with water is called phreatomagmic.

“The magma was shattered violently and turned into a cloud of dust. The dust column rose to about 12 km and encountered horizontal currents in the atmosphere that spread the cloud over a large area of Europe, paralysing air traffic. Paradoxically, the nearest airport in Reykjavik was not affected by this phenomenon.”

Icelanders were also worried in 2014, when the volcano Bardarbunga woke up. It is partially under the glacier and has a very dynamic system of as many as five magma chambers at great depth.

Słaby said: “The eruption would be dangerous for the local residents because not only would there be a strong emission of lava, dust and toxic gases, but severe floods would also occur. Fortunately, this volcano found a side outlet for its magma and it was quietly emitted without the glacier melting rapidly. A disaster was avoided.”

She added that it was impossible to predict volcanic eruptions, saying: “At this stage of science development we can identify and model the mechanisms leading to the formation of the magma, predict its composition.

“We are also able to predict the type of eruption, taking into account the location of the volcano's activity, we can predict what the lava flow or the flow of pyroclastic materials (dust, coarser fractions) will look like and what its composition will be, we can predict the morphological forms and structures.

“But we cannot predict a very precise time of eruptions. On the other hand, using the knowledge derived from the study of contemporary volcanoes, we can reconstruct the origin of the magma and path of activity for volcanoes from millions of years ago.”

In example, she pointed to the surprise 2014 eruption of the Japanese Ontake volcano, a popular destination for weekend trips, in which more than 60 people were killed.

Słaby said: “No one could have foreseen that it would come to this. The day was beautiful and a large number of people went for a walk on its slopes. The cloud of dust that appeared quite suddenly caused the people within it to stop breathing.”

She added that another example is the White Island near New Zealand. “The local Whakaari volcano was and still is a tourist attraction, and many companies organized tours, crater hikes, helicopter flights over the volcano. In 2019, there was a violent, unexpected eruption and more than 20 people were killed. While monitoring the volcano's activity, volcanologists were aware of its increased activity, but it was impossible to predict the exact time of eruption.

“There is no way to control volcanic activity. These are powerful forces, and man is only able to increasingly recognize these phenomena without being able to control them. To a very limited extent, we can direct them a bit.

“Let's go back to Mount Etna. During one of the eruptions, the residents of a village near this volcano dug ditches for the discharge of lava to protect their homes from being destroyed. This action had a positive effect. But compare one small lava stream to the scale of an eruption that can emit millions of m3 of lava (for example Mt. Etna in 2018, 3-6 million m3). This shows the scale of the phenomenon and our position as a human being, observer and researcher of this type of phenomena.”

Video: Live view of the Fagradalsfjall volcano eruption in Iceland