Olsztyn scientists create conditions for the development of vegetation on Mars 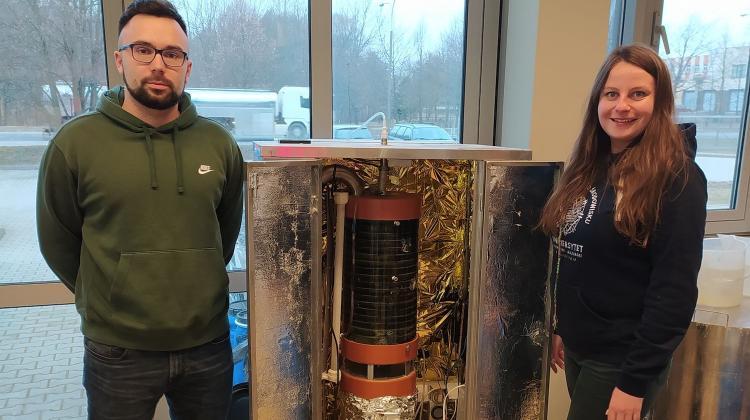 Scientists have come up with the conditions necessary for the creation of a small ecosystem that will enable the cultivation and development of vegetation on Mars.

PhD students Izabela Świca and Hubert Kowalski from the Faculty of Geoengineering of the University of Warmia and Mazury have been working on a special fertilizer from algae-fungal biomass.

The substance has excellent soil reclamation properties, including soil with specific properties, such as Martian regolith, which will fertilize the soil and develop greenery on the Red Planet.

Kowalski said: “We study the cooperation and interdependence of development between algae and fungi in almost self-sufficient conditions.

“By decomposing the multiplying biomass of microalgae, fungi release the carbon dioxide necessary for the development of algae. In the process of photosynthesis, algae produce oxygen for the fungi.

“The resulting fertilizer fertilizes the soil.”

Research is carried out in a New Life Capsul, which was specially created for this purpose. It is the only specialist device in the world, built as part of the Rector's Student Grant that supports scientific projects at the University of Warmia and Mazury. Scientists from Olsztyn want to patent it.

The capsule makes it possible to create specific conditions, in which the development of algal-fungal biomass is observed. The research is also conducted on a special material.

Izabela Świca said: “We are working on a Martian soil simulant that comes from Hawaii. Based on the collected data obtained from the exploration of the Red Planet, the Americans have created a copy of the rock covering Mars with identical properties.

“When studying the fertilizer we have developed, we conduct experiments on samples of this simulant in the New Life Capsule.”

But even before Elon Musk builds his domes and sends people to Mars, the results of Olsztyn PhD students' research may help restore soil fertility in degraded or desert areas on Earth.

Świca said: “Our research will enable the cultivation and development of vegetation in places where it cannot be done today. In the face of the growing world population and the still unresolved problem of hunger, organic soil fertilizer brings hope of living conditions improvement for millions of people.”