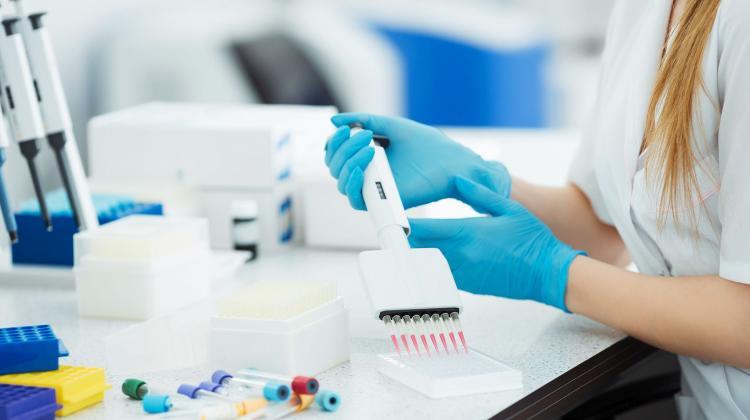 Scientists including researchers from the University of Warsaw have described the way the activity of enzymes in intracellular condensates contributes to the degradation of mRNA.

The research published in the journal Nature Chemical Biology will help with the further development of mRNA-based therapies.

Messenger RNA (mRNA) is produced in the nucleus of the cell. It is a fragment of code copied from DNA, containing a recipe for building a specific protein or peptide. When the mRNA leaves the cell nucleus, it goes to the ribosomes, which are responsible for producing the desired protein based on this recipe.

The 5' cap, a unique structure found on the 5' end of an mRNA molecule, plays an essential role in protein biosynthesis. The cap removal process is a step preceding messenger RNA degradation. It takes place in protein condensates (called P-bodies), which contain nucleic acid and Dcp1/Dcp2 enzymes responsible for mRNA degradation. Now, researchers from the University of Warsaw and the University of California in San Francisco have shown how the activity of the Dcp1/Dcp2 enzyme can be 'switched on' or 'switched off' in condensates.

Professor Jacek Jemielity from the Centre of New Technologies of the University of Warsaw said: “In simple terms, condensates resemble oil suspended in water. They are a separate liquid substance, different from the surrounding cytoplasm. They are responsible for separating various biochemical processes taking place in cells.”

The researchers discovered that Dcp1/Dcp2 enzyme activity is regulated by protein-protein interactions that lead to liquid-liquid phase separation and condensate formation. Separation of the Dcp1/Dcp2 enzyme fixes it and inhibits cap removal from mRNA. The addition of another protein, Edc3, causes enzyme changes that lead to the removal of the cap structure in the mRNA stored in the condensates and consequently enables mRNA degradation.

The research results indicate that the structures where phase separation takes place are sites of very precise enzyme activation/deactivation. These findings contribute to our understanding of how sometimes in protein condensates seemingly opposing biochemical processes can take place, that have not yet been explained.

Obtaining the results of the research described in the paper was possible thanks to the method for labelling of the structure of mRNA with fluorescent tags, developed by a team of researchers from the University of Warsaw. The results of the study will help better understand the changes occurring in cells and enable the development of further mRNA therapies.

Dr. Joanna Kowalska from the Faculty of Physics, University of Warsaw, said: “The processes of mRNA degradation, in which Dcp1/Dcp2 enzyme participates, have a direct impact on the intracellular stability of mRNA-based therapeutics and vaccines. To enable observation of mRNA degradation process in condensates, we created RNA molecules specifically labelled (glowing) with a different colour at each end. In the future, this method may also be used to track the degradation of mRNA-based therapeutics, and, consequently, to search for factors that slow down this process."