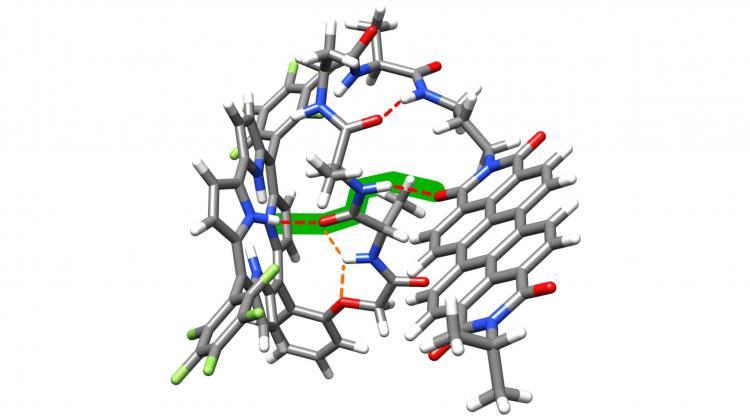 A molecule designed by the team, where long-range electron transfer (green line) has been observed for the first time through hydrogen bonds (red dotted lines). Previously known effect called hopping does not occur in this case. Credit: R. Orłowski et al., PNAS 2021

An international team has observed for the first time that long-range electron transfer within a chemical molecule can occur through hydrogen bonds without the so-called hopping. The discovery published in PNAS (https://www.pnas.org/content/118/11/e2026462118) could help not only better understand how proteins work, but also design new materials.

For life to exist, the processes of energy and electron transfer within and between chemical molecules are necessary. When electrons (particles that carry a negative electric charge) are transferred, they jump from one place to another in the chemical molecule. Transferring electrons is the basis of photosynthesis, in which a photon (a light particle) excites a chlorophyll molecule and removes an electron from it, which then escapes to another place. The energy accumulated in this process ultimately powers the cell. The electron transfer process is also necessary for the repair of damaged DNA or for the work of certain enzymes. But it is also important in engineering, for example in the construction of photovoltaic cells and in photonic technologies.

Chemists have long known that electrons can jump short distances. However, there were also known processes of electron hopping over a longer distance (this is called long-range electron transfer). So far, only such situations have been observed that the electron would jump over a long distance, but on the condition that it had 'steps' in its path, places in the molecule on which it could hop one by one, and as a result travel a longer route.

Now a team of scientists led by Professor Daniel Gryko from the Institute of Organic Chemistry of the Polish Academy of Sciences has shown a new way of electron transferring through tunneling, without traditional 'steps'.

Gryko said: “In our research, we have been able to prove for the first time that the electron transfer process can take place between opposite and distant fragments, provided that there is a network of internal hydrogen bonds in the molecule.”

To show the complex process scientists had to design and produce a molecule, in which this electron transfer would take place. The research took three years, but the effort paid off as within the particle, the electron moved from one end of the molecule to the other, which would not be possible if the shape of the molecule was linear.

The non-linear, ’scorpion-shaped’ molecule, consisting of several amino acids, has an electron-rich part (donor) and an electron-poor part (acceptor) in its structure. Thus, electrons from one end of the molecule 'wanted' to go to the other end, but the charge travel along the entire molecule was not possible. The only thing that could happen there was an electron jumping from the scorpion's 'head' to its 'tail'.

The researchers showed that it was possible thanks to the fact that during the jump, the electron could take advantage of the presence of intramolecular hydrogen bonds on its way - the forces that held the tail and head of the scorpion together. An innovative idea was to select the donor and acceptor in such a way that they would form hydrogen bonds.

Professor Gryko said: “We expect other teams to use this model and our knowledge to design their molecules for different purposes, not only molecular biology, but also materials chemistry.”

He added that new knowledge about electron transfer in molecules will help us not only better understand how proteins work, but also develop new solutions specifically related to solar cells.

He said: “In our research, we show that short peptides with only four amino acid residues provide a network of hydrogen bonds that can mediate electron transfer with extremely high efficiency. This work not only changes the view of the design of electron transfer molecules, but also suggests structural patterns mediating electron transmission in proteins.”

Professor was joined in his research by Rafał Orłowski (the first author), Professor Agnieszka Szumna and Dr. Olga Staszewska-Krajewska from the Institute of Organic Chemistry PAS, as well as researchers from California (teams led by Professors Harry Gray and Valentine Vullev).