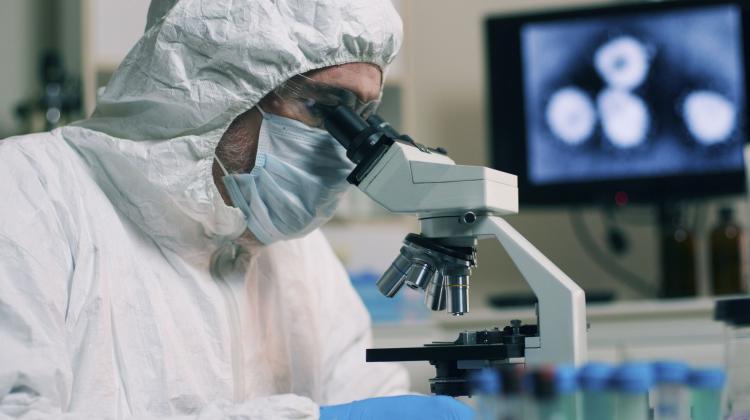 Scientists are learning more about who is at greater risk of severe COVID-19 and dying from the disease. Zinc, vitamin D, good blood glucose and sodium levels are examples of factors that, in addition to age or accompanying diseases, appear to affect the level of risk.

Just like with other traits, nature has not split the susceptibility to severe COVID-19 and the risk of death equally. Scientists keep finding genes that influence the risk of complications.

For example, a team from the Okinawa Institute of Science and Technology discovered a set of genes that reduce the likelihood of a severe course of the disease by approx. 20%. The genes in chromosome 12 help cells fight the genomes of the viruses that attack them, and part of the population inherited them from Neanderthals.

Polish scientists working within the international consortium The COVID Human Genetic Effort have confirmed that some variants of genes (such as TLR3, IRF7, IRF9) involved in the immune response using interferon type I may have an impact on a more severe course of COVID-19. Interferons are part of the so-called innate immunity. They fight the virus before the body produces specific antibodies against it.

Polish scientists also selected about six genetic anomalies, i.e. gene variants that may have an impact on the more severe course of COVID-19. These genes perform various functions in the body, says Dr. Zbigniew Król from the Central Clinical Hospital of the Ministry of Interior and Administration in Warsaw. They, in cooperation with MNM Diagnostics from Poznaจฝ, is looking for genetic markers that affect the intensity of the course of COVID-19 by collecting and analysing the genomes of people who have contracted COVID-19. These studies may result in a test that will help identify patients at high risk of hospitalisation and complications.

New research suggests that to some extent, the risk can be influenced with fairly simple methods.

For example, experts from the Juan Ramón Jiménez University Hospital in Huelva, Spain, noticed that people with hyperglycaemia, (elevated blood glucose levels), are at a much higher risk of death, regardless of whether they have diabetes. They also more often require intensive care and ventilation. The researchers came to these conclusions after analysing the history of over 11,000 hospitalised patients. While the risk of death in patients with normal glucose levels was 15.7%, in those with high levels it was 41.4%. The authors of the discovery therefore call for the introduction of mandatory tests for hyperglycaemia and for its treatment in patients hospitalised for COVID-19 who do not have diabetes.

Hyperglycaemia present on admission cannot be ignored, it must be detected and treated appropriately to improve the chances of non-diabetic COVID-19 patients, says Dr. Javier Carrasco, co-author of the study published in the Annals of Medicine. Spanish experts explain that elevated glucose levels can result not only from diabetes but also from other diseases or even an injury.

กฐSodium measurements can inform doctors about which COVID-19 patients are at high risk of deterioration and death. Sodium levels can guide decision-making about whether a COVID-19 patient needs hospital admission or monitoring in the intensive care unit,กฑ says lead investigator Ploutarchos Tzoulis.

Scientists note that sodium levels are routinely measured after a patient is admitted to hospital, the test is inexpensive, and normal levels can be restored relatively easily. They aaa that high sodium may be the result of diarrhoea, vomiting, or drinking too little liquids. It is also the main ingredient of table salt.

Another element that may be of great importance for the course of COVID-19 is zinc. Its role was reported by specialists from the Spanish Pompeu Fabra University. A study involving 249 patients with an average age of 65 showed that low zinc levels were usually associated with more inflammation and on average three times longer stay in hospital compared to higher levels of the element. As many as 1 in 5 people with low levels of zinc died, and only 5 percent patients with high zinc. Among the survivors, zinc levels were on average significantly higher (62 μg/dL) compared to those who died (49 μg/dL).

Dr. Robert Güerri, author of the discovery said: กฐWe have shown the importance of zinc levels in patients' blood as an additional predictor of outcome in covid-19, as well as its potential as a therapeutic tool for treatment.

กฐWe therefore propose this variable as a new parameter to predict the evolution of patients, and we propose initiating clinical trials concerning zinc supplementation in patients with low levels admitted for COVID-19 and implementing programs to administer supplements to groups at risk of having low zinc levels to reduce the effects of the pandemic.กฑ

According to researchers, zinc work in two ways: it regulates the work of the immune system and limits the multiplication of the virus in infected cells.

There are more substances that can help protect against COVID-19. One of them is vitamin D. In a study involving 235 hospitalised patients, a team from Boston University found that people with normal vitamin D levels (at least 30 ng of 25-hydroxyvitamin D per ml) suffered from severe COVID-19 symptoms much less frequently, and patients over 40 years of age with normal vitamin levels died 51.5% less often compared to those who had deficiencies.

Researchers previously found that normal vitamin D also reduces the risk of contracting the coronavirus. They also suspect that it helps treat infection with other viruses that affect the respiratory tract, including the flu. At the same time, they point out the commonality of deficiencies of this vitamin, especially in the winter months.

If someone wants to increase their resistance to COVID-19, they should also give up tobacco. Some studies show a link between smoking and severe COVID-19. It is better to avoid e-cigarettes, too. For example, a team from the University of Rochester found in research on mice that chronic exposure to nicotine alone affected inflammation in the lungs and increased the number of ACE2 receptors, through which the virus enters cells.