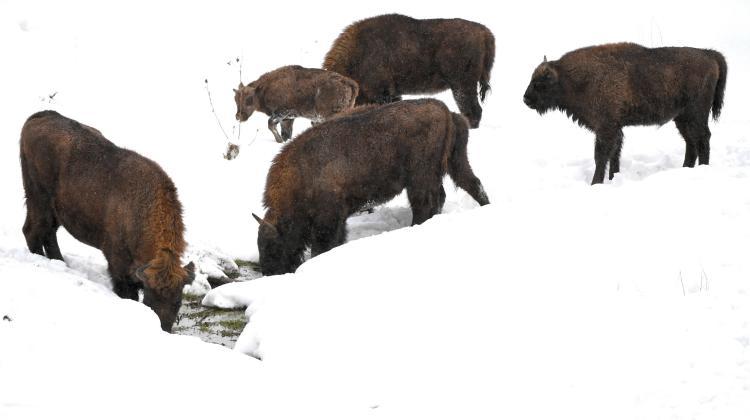 The number of European bison in the Bieszczady Mountains is growing, with 719 being counted during the most recent inventory.

And, says Edward Marszałek, spokesman for the State Forests in Krosno, 12 of them can be seen in the demonstration pen in Muczne.

He said: “This is a few percent increase compared to last year, when a total of 677 animals were counted, nine of which lived in the pen at the time.

The inventory shows that the largest cluster of European bison is found in the forests of the Baligród Forest District. A population of 291 bison is concentrated there in 13 groups. The largest herd of Bieszczady bison was also found in the area, compositing of 60 animals.

Monitoring the European bison is entrusted to the State Forests as part of the project of comprehensive bison protection in Poland.

Marek Marecki, head of the Regional Directorate of the State Forests in Krosno, said: “The inventory results are accurate, because it is carried out on one selected day in March in all units, including private land. Therefore, there is no risk of recording the same animals twice. We conduct health monitoring of herds throughout the year.”

For several years, scientists dealing with the Bieszczady bison have expressed concerns about the overcrowding of the population. Its results include increased damage to agricultural and forestry crops, but above all increasing epidemiological threat associated with tuberculosis and telasiosis.

Since last year, the General Director for Environmental Protection have issued regulations on sanitary culling of several dozen animals, and the remains of a dozen bison have been found, including one killed by a bear.

In recent years, 13 Bieszczady bison were sent to Bulgaria and Romania.

The first bison were brought to the Bieszczady Mountains in 1963. They belong to the Białowieża-Caucasian breed. They are descendants of the bison from the Caucasus and females from zoos and private game parks.

Bison from the crosses of the Caucasian and Białowieża lines are kept in a separate breeding line. Currently, they live in the wild only in the Bieszczady Mountains. Bison of the pure Białowieża line live in other centres in Poland.