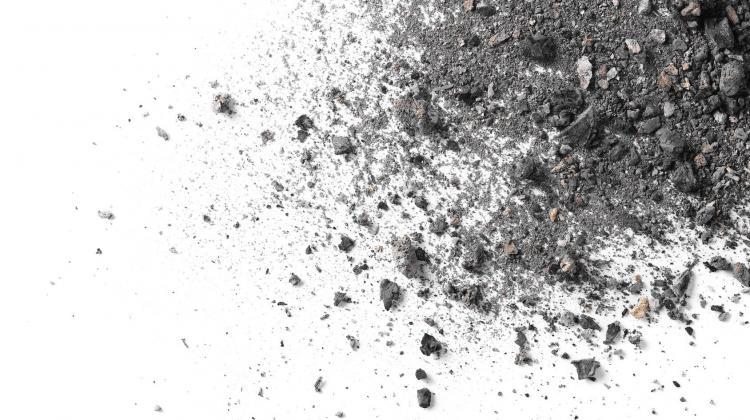 The ashes generated in the processes of coal combustion in the power industry can be converted into zeolites, so-called molecular sieves with a high CO2 capture efficiency, say scientists who have been investigating this possibility for over three years in an international research project.

Research institutions and enterprises from Poland, Czechia, Greece and Germany are involved in Coalbypro, a project launched in 2017 and co-financed by the European Research Fund for Coal and Steel. Poland is represented by the Central Mining Institute in Katowice.

Researchers tested the possibilities of reducing CO2 emissions using the coal combustion process waste products, i.e. fly ash. These are by-products of combustion, which are currently most often stored or used, e.g. in building and road construction as well as mining, as a filling material. An alternative way of using the ashes is to convert them into sorption materials in the form of zeolites.

Zeolites, also known as molecular sieves, can be used to remove various types of pollutants thanks to their properties. They are natural or synthetic aluminosilicates, characterized by a high adsorption capacity for ions and gases, including carbon dioxide.

Professor Barbara Białecka, project leader at the Central Mining Institute said: “We have developed several methods for the synthesis of zeolites based on ashes obtained from the combustion of hard coal and lignite, and the research results allowed us to determine the potential of their economic use. The synthesized zeolites showed a relatively good CO2 capture efficiency compared to other sorbents: anthracite, activated carbon and natural zeolite.”

She added: “The obtained sorbent is a relatively cheap material, the process of its synthesis is carried out at a relatively low temperature (maximum 80 degrees Celsius) and has a low carbon footprint.”

Scientists estimate that mineral sequestration could be one way to capture and use CO2.

As part of the project, researchers also confirmed that after the process of carbon dioxide sorption, zeolites could be used as a substitute for natural aggregate, e.g. in cement mortars used to fill mine workings, as materials for removing metals from wastewater, or as additives for reclamation substrates of post-industrial and degraded areas.

The research shows that the addition of zeolite after CO2 sorption to the cement mortar in an amount not exceeding 10% in relation to the weight of natural aggregate (sand) does not significantly reduce the strength of such a mortar. In addition, using zeolite after CO2 sorption allowed to achieve significant efficiency in removing heavy metals, mainly barium and strontium, iron, nickel and zinc, and organic compounds. Scientists also proved that adding such zeolite to the substrate had a positive effect on the development and condition of sown grass species.

The innovativeness of the international project in which the Central Mining Institute participated consisted mainly in proving that one of the ways to reduce the emission of harmful carbon dioxide was to use of coal combustion by-products, which could be sorbents of this gas. (PAP)