A monumental particle accelerator in the Cygnus Cocoon 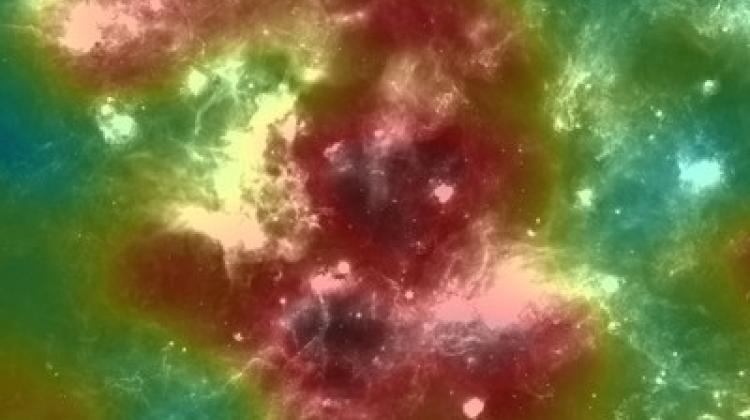 The Cygnus Cocoon region with the source of photons up to 100 TeV, coinciding with the young Cygnus OB2 cluster of massive stars. (Source: IFJ PAN / HAWC)

At the heart of Cygnus, one of the most beautiful constellations of the summer sky, beats a source of high-energy cosmic ray particles: the Cygnus Cocoon. An international group of scientists at the HAWC observatory has gathered evidence that this vast astronomical structure is the most powerful of our galaxy's natural particle accelerators known of up to now.

This spectacular discovery is the result of the work of scientists from the international High-Altitude Water Cherenkov (HAWC) gamma-ray observatory. Located on the slopes of the Mexican Sierra Negra volcano, the observatory records high-energy particles and photons flowing from the abyss of space. In the sky of the Northern Hemisphere, their brightest source is the region known as the Cygnus Cocoon. At the HAWC, it was established that photons with energies even several dozen times greater than those recorded earlier by the Fermi-LAT and ARGO detectors arrive from the Cocoon. This fact suggests that the Cygnus Cocoon is the most powerful of the hitherto known particle accelerators in the Milky Way. The results of the research, in which scientists from the Institute of Nuclear Physics of the Polish Academy of Sciences (IFJ PAN) in Cracow played an important role, are presented in the prestigious journal Nature Astronomy.

„The discovery made thanks to the HAWC observatory is an important element of a scientific puzzle that has been going on for over a hundred years, the aim of which is to decipher the nature of cosmic rays, especially when speaking of particles with the highest energies occurring in our galaxy”, says Dr. Sabrina Casanova (IFJ PAN), initiator of the latest data analysis from the Cygnus Cocoon region and its significant co-author.

The Cygnus Cocoon, a vast astronomical structure about 180 light years across, lies 4.6 thousand light years from the Sun. In our sky, we can find it almost exactly in the centre of the Cygnus constellation where it occupies an area of angular width similar to the four discs of the Moon. It is a region of intense formation of massive (and consequently short-lived) stars, with two young star clusters Cygnus OB2 and NGC 6910.

„The HAWC detector has greater sensitivity and angular resolution than previous devices of this type. With its use, during 1,343 days of observation we recorded photons of gamma rays with energies up to one hundred teraelectronvolts, coming from the direction of the Cygnus OB2 cluster. What could have been the source of such high-energy radiation?” wonders Dr. Casanova.

What emerges from the latest analysis of gamma radiation reaching the Earth from the Cygnus Cocoon is an interesting picture of phenomena of complex, multi-stage nature. High-energy cosmic rays are usually expected to come from supernova remnants, including pulsars. However, in supernova remnants protons or electrons do not have enough time to accelerate to a kinetic energy reaching several hundred teraelectronvolts. But then, inside a young cluster of massive stars, the turbulences of powerful stellar winds interacting with each other help to confine the particles for millions of years. Some of these particles have the chance to gain energies reaching petaelectronvolts.

„The situation is very complicated”, notes Dr. Casanova, and clarifies: „Some particles are expected to gain really enormous energies inside these associations of massive stars thanks to the long confinement time, comparable to the million-year lifetime of the associations themselves. But the higher the energy of the particles, the shorter the confinement time. We expect that the highest energy particles escape the cluster before they emit the gamma photons we can observe. The question is: where is the maximum acceleration energy?”.

„Our analysis does not provide a clear conclusion regarding the origin of photons with energies reaching 100 TeV. It does, however, point to a clear favourite – protons with extreme energies, accelerated in collisions of stellar winds and then emitting gamma photons when colliding with interstellar material”, says Dr Casanova.

If future observations confirm the present interpretation, the Cygnus OB2 star cluster in the interior of the Cygnus Cocoon would be the most powerful of all our galaxy's accelerators identified so far.